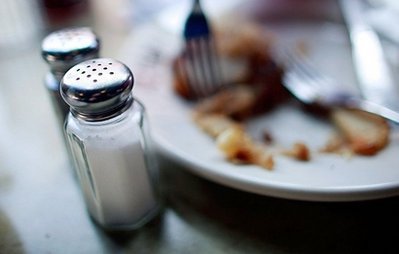 The U.S. government on Monday released new dietary guidelines urging all Americans to cut their daily salt intake by one-third and those over 50 to make more drastic reductions.

'"The 2010 Dietary Guidelines are being released at a time when the majority of adults and one in three children is overweight or obese," Agriculture Secretary Tom Vilsack said in a statement.

"This is a crisis that we can no longer ignore," he added.

The guidelines, which are updated and published every five years, also urge Americans to eat less

"The bottom line is that most Americans need to trim our waistlines to reduce the risk of developing diet-related chronic disease," Vilsack said.

The new guidelines recommend reducing daily salt intake to less than 2,300 milligrams, or one teaspoon, and urge further reductions to 1,500 milligrams for people 51 and over, African Americans and those with hypertension, all of whom now account for around half of the population.

The Center for Disease Control (CDC) estimates that Americans currently eat 3,466 milligrams, or about teaspoon and a half of sodium, which has been linked to hypertension and other cardiovascular disease.

Most of that sodium comes from processed foods, not the salt shaker, and the government has urged the food industry to cut back as well.

They also suggest eating more reasonable portions and filling half the plate with fruits and vegetables, as well as drinking more water and less soft drinks.

Earlier this month she signed a partnership with retail giant Wal-Mart to market healthier food with less fat, salt and sugar.

The guidelines can be found online at www.dietaryguidelines.gov