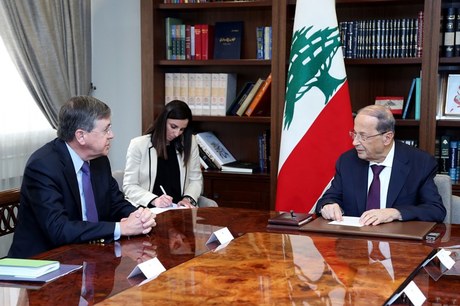 The Lebanese-Israeli negotiations over the demarcation of the land and maritime borders will be held at UNIFIL's headquarters in Naqoura, media reports said, after U.S. envoy David Satterfield told Lebanon that Israel has agreed to begin the talks.

"The U.N. will host and sponsor the negotiations, which will be held under its flag and with the participation of the U.S. mediator and the attendance of the Lebanese and Israeli sides,” al-Joumhouria newspaper reported on Wednesday.

“The Lebanese delegation will be military and will enjoy a political cover,” the daily added.

Satterfield had returned Tuesday to Beirut with Israeli responses to the Lebanese proposals.

Berri said “things are still going in a positive direction but so far have not been settled.”

And as Berri said that Satterfield relayed Israel's acceptance of simultaneous land and sea demarcation, he added that “there are things that still need discussions and scrutiny and we're awaiting the U.S. official to return with the Israeli response to them.”

Al-Joumhouria said Lebanon fears that Israel would procrastinate and waste time during the six-month period should the talks be confined to a timeframe.

The Lebanese side has insisted on UNIFIL's participation in the U.S.-mediated negotiations.

Satterfield also met with Army Commander General Joseph Aoun on Tuesday, which indicates that logistic details related to the possible negotiations have started to be raised in the preparatory contacts.

As the demarcation of borders is a political and national matter, why does a military force (and an external one at that) UNIFIL have to be involved?

Simply because Lebanon is not a sovereign nation Phillipo but one under Syrian auspices and hence the head of the Lebanese army who is under direct Syrian command will be there. Syria will not allow a Lebanese politician to speak on behalf of its prize. Conversly no Lebanese politician would dare speak (unless he is from Hizballah) directly to Israel without fear of being killed.