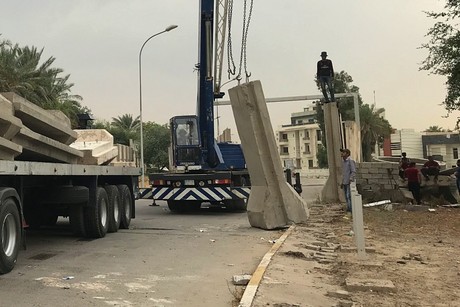 Since the U.S.-led invasion of Iraq in 2003, T-walls -- thick barriers about six metres tall and one metre wide -- have surrounded potential targets of car bombs or other attacks.

When premier Adel Abdel Mahdi came to power last year, he promised to remove barriers, checkpoints and other security measures to make Baghdad easier to navigate.

Hundreds of the security checkpoints that contributed to Baghdad's notorious traffic jams have also been removed.

And according to the Baghdad municipality, 600 streets that had been closed off to public access have been opened in the last six months.

Among them are key routes crossing through Baghdad's Green Zone, the enclave where government buildings, UN agencies and embassies including the U.S. and UK missions are based.

It was long inaccessible to most Iraqis until an order from Abdel Mahdi last year, and families can now be seen picking their way across its manicured parks for sunset pictures.

Iraq is living a rare period of calm after consecutive decades of violence, which for Baghdad peaked during the sectarian battles from 2006 to 2008.

It was followed, in 2014, by the Islamic State group's sweep across a third of the country and a three-year battle to oust the jihadists from their urban strongholds.

The group still wages hit-and-run attacks against Iraqi security forces and government targets, and Baghdad's authorities are on high alert.

Thousands of the removed T-walls have been placed on Baghdad's outskirts to prevent infiltration by IS sleeper cells, according to Bayati.