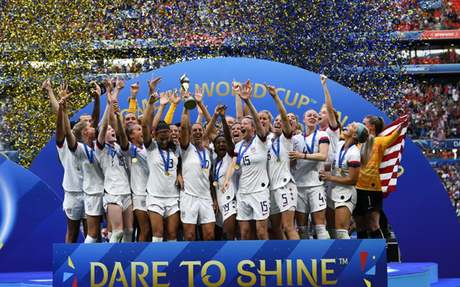 The United States underlined their status as the dominant force in international women's football by winning a fourth World Cup in eight editions on Sunday, but the tournament has also highlighted the growing threat to them coming from Europe.

In their third consecutive final, the USA were too strong for the Netherlands as they won 2-0 in Lyon to retain their title with Megan Rapinoe and Rose Lavelle scoring.

It means a European nation has not won since Germany in 2007, while the USA's four World Cups stand alongside their record four Olympic golds.

Their triumph came after they topped their group ahead of Sweden and then beat Spain, hosts France and England en route to the final, where they defeated the European champions.

While the USA started their campaign with a World Cup record 13-0 win over Thailand, their encounters with European opposition were closer affairs.

"I think the level around the world is growing exponentially every year, so four years on, this was incredibly difficult because the opponent is better and the teams we had to come through were some of the best in the world," said USA coach Jill Ellis when asked to compare this World Cup win with 2015.

"I don't know if it's us getting older or the game just evolving and becoming more challenging but it has been so emotionally exhausting this time," admitted Alex Morgan, 30, a survivor from the US team that lost the 2011 final to Japan.

The USA were the only nation from outside Europe to reach the quarter-finals in France.

Ellis -- who was born and brought up in England but only got a chance to play the game after moving to the USA as a teenager -- acknowledges that things are fundamentally changing in Europe as leading clubs invest more heavily in women's teams.

Real Madrid are the latest to get involved, and standards are rapidly rising in domestic leagues.

"Right now, with the trophy going back to the States, no," Ellis joked when asked if she was concerned by the progress being made in Europe.

"But with the investment the rest of the world has made, all these major clubs can see how amazing this World Cup was and how rich in terms of fan support that it was.

"Teams will want to continue to invest in the women's game. What does that do? It makes our job hard, but I think also we have had a commitment from our federation to grow our domestic league, because without leagues you can't exist as a national team."

While Germany and the Scandinavian countries remain prominent, and England and France keep aspiring to major tournament success, Spain and Italy have made huge strides, aided by the development of their own leagues.

It has been a different story in the Netherlands -- all of their starting line-up in Sunday's final are based elsewhere in Europe.

"The competition outside is better than in the Netherlands, that's why everyone is fitter and they are playing better, and I think if we do that more, then in four years we can do this again," commented defender Desiree van Lunteren.

For now, however, none of them have been able to stop this USA generation, who are worthy successors to the great team who won the title as hosts in 1999, eight years after the country lifted the inaugural World Cup.

"I hate comparing us to past teams. We all have our own legacy, we tried to carry the tradition that the '91ers and '99ers left for us and I think we are doing a pretty damn good job of it," said Morgan on Sunday.