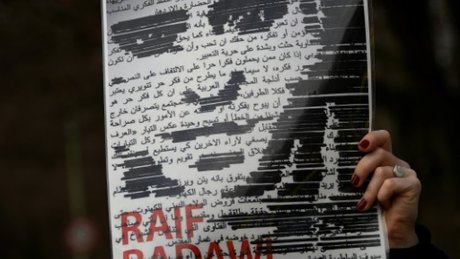 French press freedom group Reporters Without Borders (RSF) confidentially met top Saudi officials in Riyadh to press for the release of journalists after the murder of dissident writer Jamal Khashoggi, it revealed Wednesday.

The RSF delegation went to Riyadh in late April and urged Saudi authorities to release 30 journalists who it says are imprisoned in the kingdom for their work.

The group said it was only confirming the visit now after the prospect of pardons did not materialize and as Saudi Arabia prepares to host next year's G20 summit.

"We had a series of meetings from 21-23 April and we could meet officials at a high level," RSF's secretary general Christophe Deloire told AFP.

"It was an unprecedented mission," he added.

Khashoggi, a former royal insider turned dissident, was strangled to death and his body dismembered inside Saudi Arabia's consulate in Istanbul last year.

"We were able to discuss on each occasion the assassination of Khashoggi and the situation of journalists, without any exception," said Deloire.

He defended the secrecy of the mission, only revealed now at the start of a Global Conference for Media Freedom in London, saying "there needs to be public and non-public pleading".

RSF added in a statement that its delegation led by Deloire had met key Saudi figures usually out of reach for a foreign NGO, including Foreign Minister Adel al-Jubeir and public prosecutor Saud al-Mojeb.

"The mission remained confidential until now as the possibility of pardons during the Ramadan period was discussed -- a point the Saudi government did not act on," RSF said.

RSF said that the release of the journalists would be the only way to clear Riyadh's way to the G20 chairmanship and hosting the annual summit following the assassination of Khashoggi.

The prospect of Mohammed bin Salman -- known as MBS and seen by many as the country's de-facto leader -- greeting world leaders at the next G20 summit has already raised eyebrows.

"Political accountability for Mr Khashoggi will mean that it (the Saudi G20) doesn't happen or it's moved elsewhere, or something is being done to ensure that the political system in the US and in other countries does not become complicit of that international crime," Callamard said in Washington earlier this month.

The communique issued at the end of the G20 summit in Japan last month confirmed that Saudi would host the next summit in 2020.

So far no G20 member has mulled any kind of boycott.

For the first time, Saudi Arabia dipped into the bottom 10 countries in RSF's 2019 World Press Freedom Index, and is now ranked 172nd out of 180 countries.

Among the 30 that RSF wants released is Saudi blogger Raif Badawi who was jailed for 10 years for insulting Islam and has received 50 lashes of 1,000 to which he was sentenced.