Bats Hang where Israeli Soldiers Once Stood in Jordan Valley 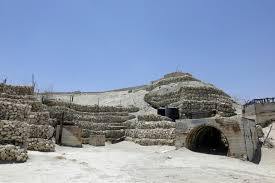 The whoosh of wings disturbs the quiet of an abandoned, pitch-black maze of corridors next to the Jordan River in the occupied Palestinian territories.

It is the hallmark of what this former Israeli military outpost on a dusty, yellow marlstone hill in the West Bank has become: a man-made bat cave.

The outpost is one of a dozen or so mini-fortresses that were built among the hills above the Israel-Jordan border after the 1967 Six-Day War and abandoned by Israel following a 1994 peace accord between the countries.

It wasn't long before they became full-time bat sanctuaries, helped along by Israeli rangers and ecologists in an effort to help the species whose habitats had been reduced.

Israel and the Palestinian territories are home to some 33 bat species, all but one insectivores, which are at global extinction risk -- in many cases due to human activity, said Amos Sabah, an ecologist for the Israel Nature and Parks Authority.

In the area dotted with outposts, roadworks and other development has damaged natural caves, said Shmulik Yedvab, director of the mammal department at the Society for the Protection of Nature in Israel (SPNI).

The thinking was to "create alternative spaces" by repurposing the outposts, Yedvab said.

Palestinians see these kinds of projects very differently. They accuse Israel of harming their environment in the Jordan Valley, including through the use of water resources.

Anton Khalilieh, executive director of Nature Palestine Society, said while any individual project to protect animals was to be welcomed, this was taking place in the occupied Palestinian territories and could not be divorced from politics.

"If the Israelis are doing any conservation activities to protect animals, in my opinion as a conservationist this is fine," he said.

"But this is the Jordan Valley, which is a part of the West Bank -- an area that should be under complete Palestinian control.

With walls and ceilings of sheet metal or smooth concrete, the conditions in the outposts were not ideal for bats.

The SPNI worked with the Israel Nature and Parks Authority  and the army -- still the landlord of the vacant structures -- to provide footholds for the bats using plastic netting, construction foam, thin ropes and plaster scraped with a fork.

The winged mammals now hide from the day's harsh sun in the corridors and cavernous rooms of the former outpost, coming out at night to feast on the area's rich variety of insects.

At least a dozen types of insectivore bats can be found in the oppressively hot Jordan Valley from spring to autumn.

"They like the heat," said Sabah, during the visit to the first of the three former military positions he showed AFP.

Some outposts are now home to populations in the dozens to hundreds during peak bat season, with approximately 30 lesser mouse-tailed bats living in one complex AFP visited halfway between the Dead Sea and the Sea of Galilee.

Hundreds of trident bats roost in another outpost further to the south, while an abandoned civilian structure near the border is now home to an estimated 5,000 greater mouse-tailed bats.

Most of the outposts that have become bat lairs are in fenced-off property controlled by the Israeli military and barred to civilians, leaving the creatures largely undisturbed.

Gaining access to the outposts is rare, as even the mere presence of humans can disrupt the bats and their routine, according to Yedvab.

The environmentalists' cooperation with the army includes advising forces on when, and how, to approach the structures, still used from time to time for training.

"We try to disturb them as little as possible," he added.

While bat populations grow slowly and the six years of close monitoring are "a footnote" in the relatively long life-cycle of the species, the area has "a stable population with a small increase", Yedvab said.

As "bio-indicators" bats provide valuable information to scientists on the local ecosystem as a whole, said Sabah.

"They are essentially our indication to the condition of the bugs, which are one of the important foundations of the ecological system," he added.

"If the bats aren't in the territory, or the population is diminishing, the meaning is that the ecological system is not healthy, something here is wrong."