How the ECB Could Boost the Eurozone Economy in 2019 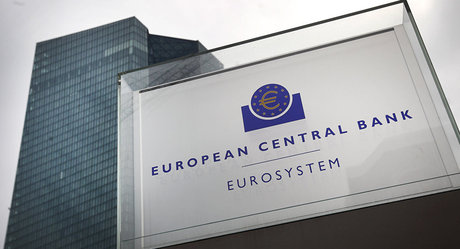 The European Central Bank is widely expected to hint at, or even announce, a dive further into negative interest rates at its gathering Thursday.

Here are the monetary policy tools the Frankfurt institution could use in the coming months to battle the uncertainty -- over trade tensions, Brexit, geopolitical clashes and emerging market woes -- weighing on progress towards its price stability goal.

The ECB has sunk interest rates to historic lows since the twin shocks of the financial crisis and eurozone crisis, as it pursues its mandated target of inflation just below 2.0 percent.

As long as the institution sees no harmful effects, it can consider pushing rates still lower.

Slower growth could prompt governors to drop the rate it charges on banks' deposits at the ECB below the present -0.4 percent, with some analysts seeing it at -0.6 percent by the end of the year.

Such a move should encourage lenders to issue more credit and invest in the real economy rather than hoarding cash.

The ECB is less likely to shift its main refinancing rate -- the interest it charges on one-week loans to banks -- from its present zero-percent level.

"The benefits look unclear" to such a move, said analyst Frederik Ducrozet of Pictet Wealth Management.

A new low in the deposit rate would harm banks and could undermine their lending activities, HSBC analysts say.

That could prompt the ECB to alleviate the pain by exempting some deposits from the very lowest rate in a so-called "tiering" scheme.

Sweden, Switzerland, Denmark and Japan have already adopted such a measure. slashing lenders' annual bill on excess liquidity, which for eurozone banks currently amounts to around 7.5 billion euros ($8.4 billion) -- mostly paid by French and German lenders.

In March, ECB president Mario Draghi said the bank would offer a third series of cheap two-year loans between September 2019 and March 2021.

The institution had offered banks the chance to borrow massive amounts at extremely favourable interest rates in schemes known as TLTRO I and II between 2014 and 2016.

The measure was another attempt to encourage lending to the sluggish real economy.

Banks, especially the more fragile members of the sector in Italy, leapt at the chance for low-cost liquidity.

ECB policymakers decided in June that depending on how much the banks lend on to the real economy, they could -- as in previous rounds -- even enjoy a negative interest rate as low as -0.3 percent on their borrowings.

That would mean the central bank effectively paying them to borrow money.

When lower interest rates alone failed to restore growth and inflation, the ECB turned to a policy of mass purchases of government and corporate bonds, known as "quantitative easing" or QE.

Between March 2015 and December 2018, policymakers bought up 2.6 trillion euros of debt, mostly at a pace of tens of billions per month.

The aim: to flush newly-created money through the financial system and into the real economy to stimulate growth.

Central bankers credit the scheme with helping ward off deflation and create millions of jobs.

Looking ahead, a possible relaunch of QE "remains the natural policy response in the absence of a sustained rebound in inflation expectations," Pictet economist Ducrozet said.

But a new round of bond-buying could require the ECB to relax a 33 percent limit on the share of any one country's debt it can buy.

That, in turn, could bring new legal and political challenges down on its head.

Germany's constitutional court is already set to reexamine the previous QE scheme at the end of July.

A group of politicians and academics charged that it was in fact "monetary financing" -- or the central bank directly footing the bill for state spending -- which is banned under European treaties.