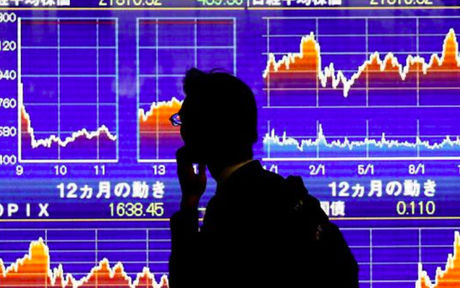 Asian stock markets fell Wednesday after US Democrats launched formal impeachment proceedings against Donald Trump and on renewed worries about trade as the president adopted a hard line on China.

Democrats accuse Trump of abuse of power in a reported attempt to pressure the newly installed president of Ukraine to open a corruption investigation into his lead challenger for the White House, Joe Biden, and Biden's son Hunter.

Trump denounced the inquiry as "Witch Hunt garbage" and said he would release a transcript of his phone call with Volodymyr Zelensky.

Concern over US political turmoil added to worries over international trade after Trump ripped into China at the UN, declaring that the time of Beijing's "abuses" of the system was "over."

Touting what he argued were the benefits of his tariff war with China, Trump reiterated his hope that a trade agreement "beneficial to both countries" could be struck.

"But as I said very clearly, I will not accept a bad deal for the American people," he said.

"Trump's speech at the United Nations lacked any semblance of endearment towards China, but instead, he used this opportunity to reignite US-China tensions while renewing his attacks on America's largest technology companies," said Stephen Innes, Asia Pacific market strategist at AxiTrader.

Oil prices took a hit, with both main contracts down 0.6 percent following Trump's tough talk on China and after data indicating a build up in US crude inventories.

In currency trading, the pound slipped against the dollar in Asia. It had rallied Tuesday following Britain's Supreme Court ruling that Prime Minister Boris Johnson's suspension of parliament was "unlawful", providing a spark of hope that Brexit will be more orderly than previously feared.

"The ensuing British Pound rally was a bit underwhelming. It probably reflected the uncertainty of both Mr Johnson's tenure and the Brexit process with October the 31st looming," said OANDA's Halley.