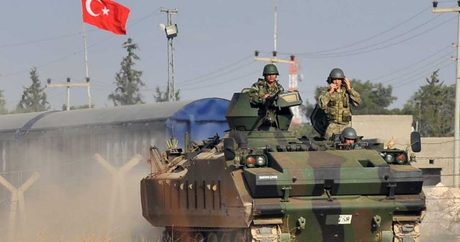 The Turkish military operation launched on Wednesday against Kurdish militia fighters in Syria is Ankara's third offensive in the war-torn country.

Here is a recap of the previous two.

In the early hours of August 24, 2016, Turkish artillery pound dozens of Islamic State group (IS) targets around the Syrian border town of Jarabulus, near the Euphrates river.

It is the start of operation Euphrates Shield, targeting IS and the People's Protection Units (YPG), a U.S.-backed Kurdish militia that Ankara considers a terrorist group.

In a few hours, hundreds of Syrian rebels backed by Turkish aircraft and tanks drive IS from Jarabulus.

The offensive is launched days after an attack blamed on IS that killed 54 civilians in the Turkish town of Gaziantep.

Turkey also wants to prevent the creation of an autonomous Kurdish region in Syria.

It had been alarmed when the YPG-dominated Syrian Democratic Forces (SDF) had earlier in August captured from IS the strategic Syrian town of Manbij, 30 kilometers (19 miles) from the Turkish border.

Turkey says the YPG is a "terrorist offshoot" of the outlawed Kurdistan Workers' Party (PKK), which has been waging an insurgency against the Turkish state since 1984.

On February 24, 2017, the Turkish army announces it has taken control of the Syrian town of Al-Bab, the final objective of Euphrates Shield and the last IS bastion in Syria's northern Aleppo province.

For Ankara, control of the town means it can establish a buffer between the different Kurdish-controlled territories in northern Syria, preventing them from uniting.

On January 20, 2018, Turkey launches a major air and ground operation, dubbed Olive Branch, against the YPG in Syria's region of Afrin, about 30 kilometers from the border.

The next day, Turkish tanks and soldiers enter the region. Ankara says it aims to create a security zone deep inside Syria.

On March 18, Turkish forces and their Syrian auxiliaries oust the Kurdish militia from the town of Afrin and raise the Turkish flag.

Pro-Turkish forces strengthen their control of Afrin, which is emptied of its tens of thousands of inhabitants.

The fighting displaces about half of the Kurdish enclave's 320,000 people, according to the United Nations, while rights groups document abuses after the takeover.

Nearly 300 civilians are killed in the operation, according to the Syrian Observatory for Human Rights, a Britain-based war monitor.

Also left dead are around 1,500 Kurdish militiamen and 400 pro-Turkish fighters, it says.