Tunisia, Cradle of the 2011 Arab Spring 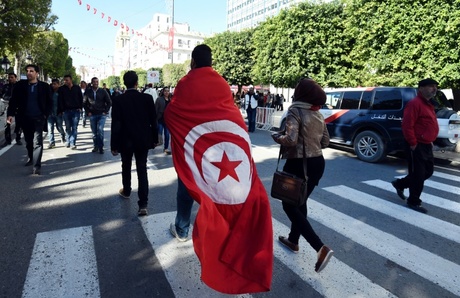 Eight years after its revolution unseated a longtime dictator and sparked a regional wave of uprisings, Tunisia is hailed as the sole democratic success story of the Arab Spring.

On Sunday Tunisians will vote in their second-ever free presidential election, to replace president Beji Caid Essebsi who died in July.

Here is some background on the Mediterranean country that is home to more than 11.5 million people:

- From independence to revolt -

A French protectorate since 1881, Tunisia gained independence in 1956.

A year later, it was declared a republic with Habib Bourguiba as its president.

He was overthrown in a bloodless coup in 1987, following allegations that he had become senile and after doctors declared he was unfit to rule.

Ben Ali was elected and re-elected in a string of undemocratic votes until he was ousted in the 2011 uprising.

Tunisia's central town of Sidi Bouzid provided the spark for the 2011 regional revolt when a young street vendor set himself on fire there in December 2010.

More than 300 people were killed in the Tunisian uprising. The spark of revolt spread across the region, toppling other dictators such as Egypt's Hosni Mubarak.

Tunisia's first free elections were held in October 2011 to choose a new assembly tasked with writing a new constitution.

The polls were won by the Islamist Ennahda movement.

Lawmakers adopted the new constitution in January 2014, after two years of political turmoil that exposed a deep rift between Ennahda and the secular opposition.

In October 2014, the secular Nidaa Tounes party came out on top in legislative polls.

Tunisia is also seen as a pioneer on women's rights for North Africa and the Middle East.

The 2014 constitution enshrines equality of opportunity for men and women in public office and seeks parity in elected bodies.

In 2016, the International Monetary Fund approved a four-year loan of $2.9 billion for Tunisia in exchange for pledges to impose austere economic reforms.

After a period of stagnation, growth reached 2.5 percent in 2018 but the IMF expects it to drop back to 2.0 percent this year.

Even after the revolution, wealth and control of the economy remain concentrated in the hands of a small elite.

Unemployment stands at more than 15 percent, with young university graduates the worst hit.

Phosphates are a strategic sector for the economy but their production has been hindered by social unrest.

Tunisia is also one of the world's leading producers of olive oil.

Holidaymakers have started returning to its beaches and towns after being put off by a series of deadly jihadist attacks in 2015.

Among Tunisia's many sites on UNESCO's World Heritage list are the medinas of Tunis and Sousse, and the archeological site of Carthage, the ancient rival of Rome.

The holy city of Kairouan and nearby El Jem, whose Roman colosseum ranks among the finest in the world, are also listed.

The national Bardo Museum is famous for its exceptional collection of mosaics. It was the target of a jihadist attack in March 2015 that killed 21 tourists and a policeman.