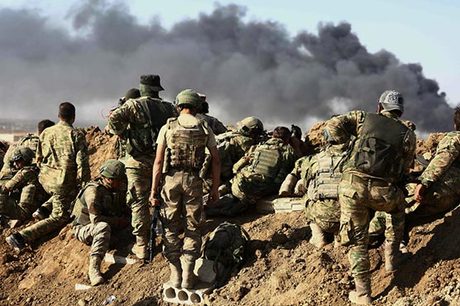 Two Turkish soldiers were killed on Tuesday after shelling from the Manbij region, where Ankara's forces had clashed with Kurdish militants the night before, the defense ministry said in a statement.

The soldiers were killed "following artillery fire by the terrorists from the Manbij region," the ministry said.

Seven soldiers were initially wounded in the attack, it added.

The statement did not provide the precise location but said the army returned fire and killed at least 15 "terrorists."

Six Turkish soldiers have been killed since Ankara launched its cross-border operation last Wednesday against Kurdish militants in Syria.

Syrian forces have moved into Manbij following a deal between Damascus and the Kurds over the weekend to try to hold back Turkey's advance.

Meanwhile, shelling from Kurdish positions in Syria killed two civilians and wounded 12 others on Tuesday in the Turkish border town of Kiziltepe in Mardin province, the Anadolu state news agency reported.

Turkish border towns have come under heavy artillery fire from Kurdish positions in Syria, killing a total of 20 civilians since the operation began, and causing thousands to take refuge away from frontier.

Ankara is pressing its military operation against Kurdish militants, with the goal of clearing its border from "terrorists" and creating a "safe zone" to repatriate Syrian refugees.