For Moscow, a Win in Syria but Fraught with Risks 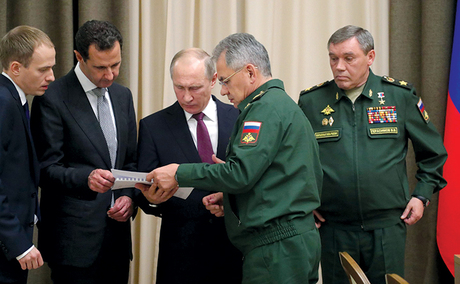 The withdrawal of U.S. forces from northern Syria was a win for President Vladimir Putin, strengthening Russia's role as the key foreign player in the war-torn country.

But Ankara's offensive against the Kurds in northern Syria is fraught with risks for Moscow, especially if clashes break out between Turkish and Syrian forces.

Russian officials said Tuesday they were working with Turkey to avoid confrontation with pro-regime forces in northern Syria, where Turkish troops have moved in against Kurdish fighters.

Syrian government troops -- backed by Russian forces since Moscow launched an intervention in 2015 -- have also moved into the north under a deal reached with the Kurds.

Moscow's special envoy on Syria, Alexander Lavrentyev, said Tuesday that "negotiations are taking place in real time" to avoid any clashes between the various forces in the area.

He also said Moscow would not allow clashes between Turkish and Syrian forces.

"This would simply be unacceptable... And therefore we will not allow it, of course," Lavrentyev, who was on a visit to the United Arab Emirates, was quoted as saying by Russian news agencies.

Russia's defense ministry meanwhile said Russian forces were continuing to patrol border regions along the "line of contact" between Syrian and Turkish forces, in the same area where US troops were deployed.

"Cooperation has been organised with the Turkish side," it said.

Lavrentyev also confirmed that the Kurds and Syrian authorities had held negotiations at a Russian military base in Hmeimim.

"We don't know the concrete results" of the talks, he said, but Moscow hopes they can be "a major step towards the restoration of Syria's sovereignty and territorial integrity."

Russia's backing of Syrian President Bashar al-Assad has seen Moscow emerge as a crucial force in the country.

The intervention marked a turn-around for Assad and his forces have since retaken much of the territory once outside government hands.

In return, his regime has signed 49-year leases on two Moscow-run facilities -- a naval base in the Syrian port of Tartus and the Hmeimim airbase -- that gave Russia its first long-term presence in the Middle East.

Now US President Donald Trump's decision to pull American troops from Syria, which led quickly to the Turkish assault on the Kurds, has boosted Moscow's position.

"It eliminates all sorts of obstacles to possible military action. Before the withdrawal they were afraid to hurt American soldiers," said Alexander Shumilin, a Moscow-based Middle East expert.

"In propaganda and political terms, this withdrawal is seen as the flight of the Americans and the Russians taking their place."

But Russian defence analyst Alexei Malashenko said it was too early for Moscow to celebrate.

Turkey has long opposed Syria's regime, including by backing rebel fighters, and Moscow risks finding itself stuck between its ally Assad and a powerful NATO member.

"God forbid that there are clashes between the Syrian army and the Turks," he said.

"Because the Turks will beat them... Then we either drop Bashar or launch aircraft (in support of Assad's forces), and this will mean the end of friendship with Turkey."