US Diplomats Taken Hostage in Iran 40 Years Ago 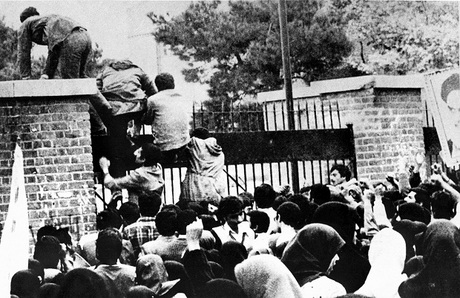 Forty years ago, Islamist students stormed the US embassy in Tehran and took 52 Americans hostage for 444 days in a crisis that came to symbolise the long and bitter standoff between the two countries.

Mid-morning on November 4, 1979, between 300 and 400 radical college students storm the United States embassy in central Tehran, scaling its perimeter wall and railings.

Identifying themselves as followers of hardline cleric Ayatollah Khomeini, they demand the extradition of the toppled shah, Mohammad Reza Pahlavi, from the US where he is undergoing medical treatment.

"Armed with clubs... the students invade the chancellery after three hours of resistance, during which marines fired tear gas grenades before being taken hostage," reported an AFP correspondent at the scene.

More than 60 Americans are taken hostage, their hands bound and eyes blindfolded.

Some are quickly freed, while 52 endure the entire ordeal.

A gallows is erected in front of the embassy. "At the end of the rope hangs a sign: 'For the shah'," AFP's correspondent recounted.

"Next to it burns an American flag, in front of the outstretched fists of several hundred people who have turned out to demonstrate their support for the embassy's occupiers."

The US flag is replaced with a green banner that bears the words "Allahu Akbar" (God is Greatest).

A "loudspeaker shrieks anti-American slogans between verses of the Koran and revolutionary songs, deafening the police and Revolutionary Guards deployed in front of a wall covered with wording, some of it anti-American," the AFP report says.

Bearded male students armed with clubs and chador-clad female students with large pictures of Khomeini walk around the embassy gardens.

"Bread and boxes of sandwiches are passed to them through the railings," one story says.

The apparently spontaneous assault on the embassy reignites enthusiasm for an Islamic revolution.

Hardline religious leaders sideline the moderate interim prime minister, Mehdi Bazargan, who might have negotiated with the United States.

To chants of "Marg bar Amrika" ("Death to America"), masses of Iranians demonstrate in support of the occupation of the embassy.

Bazargan resigns on November 6 and a cleric-dominated Revolutionary Council takes over.

Iran refuses to sell oil to the US, which responds with an embargo on consumer goods and a financial asset freeze.

The government of President Jimmy Carter breaks off diplomatic relations with Iran on April 7, 1980, and imposes a trade embargo.

A top-secret military rescue mission, codenamed Operation Eagle Claw, ends in disaster on April 25 at a rendezvous and refuelling point in the desert, roughly 400 kilometres (250 miles) southeast of Tehran.

A sudden sand storm causes a helicopter and C-130 cargo plane to crash, killing eight servicemen. The operation is abandoned.

Khomeini sees the event as divine punishment against the United States, which he labels the "Great Satan".

The hostages are moved to various cities, including the holy centre of Qom.

On July 27, the shah dies in Cairo. The students say they will not free their hostages until his personal fortune is returned to Iran.

In September 1980, Khomeini lays down four conditions for the hostages' release: restitution of the shah's fortune, unfreezing of Iranian assets in the US, cancelling of US demands for compensation and non-interference in Iranian affairs.

Mediation by Algerian diplomats obtains on January 19, 1981, a US-Iran accord on the hostages' liberation. The 52 are freed on January 20, the same day Ronald Reagan is inaugurated president.

The embassy becomes a museum to expose US "crimes" against Iran.