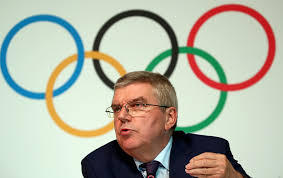 Olympic chief Thomas Bach on Tuesday urged governments to do more to help "drain the doping swamp" by going after the entourage of a cheating athlete.

"The athlete is not the only culprit," the President of the International Olympic Committee (IOC) told the World Anti-Doping Agency (WADA) conference in Katowice.

"The athlete is supported and sometimes even driven to or forced into doping by a secretive network which may include coaches, agents, dealers, managers, officials from government or sport organisations, doctors, physiotherapists or others," he said.

But while sports organisations can punish competitors who test positive they are powerless "to identify and sanction in a deterrent way the athletes’ entourage."

As an example he said if the IOC identified a doctor guilty of doping it will banish him from the Games.

"But after the doctor goes back home, in most cases he can just continue with his nefarious business without any consequences.

"This is not acceptable. This is the wrong signal. This needs to be changed," he told WADA delegates on the opening day of their fifth world conference.

"This is where we need the full support of the government authorities. They have the necessary authority and tools to take action."

Bach cited state-doping in Russia, the Aderlass blood-doping Operation and the scandal-hit Nike Oregon Project as all highlighting the "urgent need to focus much more on the athletes’ entourage".

By holding everybody implicated in a doping case accountable "we can take a major step forward to strengthen justice and credibility for the protection of the clean athletes and to drain the doping swamp."

Later, WADA's incoming president Witold Banka took a swipe at the scale of the agency's "ridiculous" budget of less than 40 million dollars.

"If you want sport to be clean you need to increase your financial support for the fight against doping."

WADA's current backers, governments and the IOC, have promised to increase the budget by eight percent annually until 2022.

Bach had reminded his audience that the IOC signed a check for $30 million to launch the International Testing Agency which has taken over responsibility for testing from 41 sports federations at the last count.

Banka, 35, is set to be rubber-stamped on Thursday as successor to current president Craig Reedie having received the endorsement of the WADA executive committee and foundation board.