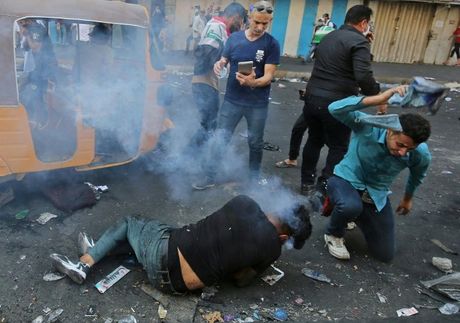 Four protesters were killed by tear gas canisters in Baghdad on Thursday as security forces try to snuff out the largest grassroots movement to sweep Iraq in years.

Iraq's political elite has come under renewed pressure in recent days from both the street and the international community to seriously address calls for sweeping reform.

There has been mounting international criticism of the authorities' response to the protests, which have left more than 330 dead since October 1.

The protesters have occupied the square for three weeks, braving live rounds, stun grenades and even machine gun fire.

Security forces have relied heavily on tear gas to confine protesters to Tahrir, but human rights groups have accused them of improperly firing the canisters directly into crowds at point-blank range, piercing protesters' skulls and chests.

Just beside him, a demonstrator was carried away after collapsing on the ground overcome by the potent tear gas.

Thursday's deaths marked a resurgence of bloodshed after a few days of relatively peaceful protests in the capital.

The crowds in Tahrir have swelled with students and striking teachers in recent days.

In the southern hotspots of Diwaniyah, Nasiriyah, Hilla and Kut, schools and most government offices were closed on Thursday.

On Thursday, the Old City of Najaf -- one of Shiite Islam's holiest sites -- joined in with a general strike.

He was referring to the time passed since a US-led invasion toppled longtime dictator Saddam Hussein ushering in a sectarian power-sharing system demonstrators says is corrupt and must be replaced.

"We have one message: we don't want this government." said Ali, a demonstrator in Tahrir.

To address protesters' demands, the United Nations mission in Iraq (UNAMI) has proposed a phased programme of reforms.

It calls for an immediate end to violence, electoral reform and anti-corruption measures within two weeks and constitutional amendments and infrastructure laws within three months.

MPs have received a draft electoral reform bill but have yet to discuss it, and are planning to interrogate two ministers as part of a planned cabinet reshuffle.

Authorities must "step up to the plate and make things happen," Hennis-Plasschaert told AFP in an exclusive interview on Wednesday.

Piling on the pressure, the US this week "deplored the death toll" from protest-related violence and demanded authorities address demonstrators' "legitimate grievances".

"Medical workers should not have reason to fear for their lives as they engage in heroic work in already dangerous environments," regional director Sarah Leah Whitson said.

Doctors and activists have described to AFP a campaign of kidnappings they say is aimed at scaring them into stopping their work.