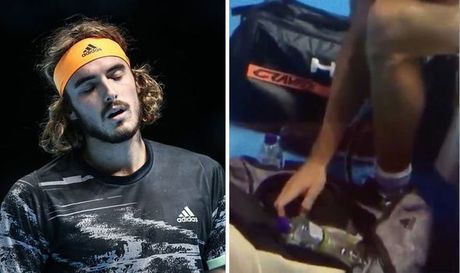 Alexander Zverev denied he was using his phone illegally during his ATP Finals round-robin defeat to Stefanos Tsitsipas at London's O2 Arena.

The defending champion was asked about the incident during the post-match press conference following his 6-3, 6-2 defeat on Wednesday.

TV footage that circulated on social media appeared to show him touching something in his bag at a changeover during the match.

But Zverev, 22, insisted he did not have his phone with him on court.

"My phone was in the locker room," he said. "I always leave it there. I don't know what they saw, but it was definitely not a phone."

When asked what he might have been touching in his bag, the German said: "I mean, a water bottle? Empty water bottle maybe?"

Zverev beat Rafael Nadal earlier in the week but his comprehensive defeat by Tsitsipas leaves his tournament hopes in the balance ahead of his final group match against Daniil Medvedev on Friday.