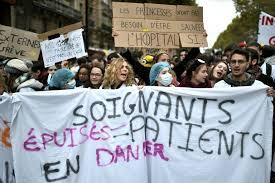 Thousands of French hospital workers demonstrated Thursday over years of cutbacks they say have harmed care in a country with a health system once the envy of the world.

Public hospitals in France have been forced to shave 9.0 billion euros ($9.9 billion) off their debts since 2005, leading to the scrapping of hundreds of beds and dozens of operating theaters while stagnant salaries have fueled a flight to the private sector.

Calling on President Emmanuel Macron to "save public hospitals", thousands of hospital doctors, nurses, students and administrative staff held protests in Paris and a dozen other cities Thursday.

The protests began in March when emergency room staff, who complain of elderly patients being left for hours on trolleys in corridors while waiting for a bed, began strike action.

Over 260 emergency rooms nationwide are still affected by the work stoppages.

On Thursday, staff from other hospital departments joined in the protests.

In Paris, several thousand demonstrators marched through the city waving placards with message such as: "Exhausted caregivers = endangered patients", "Public hospitals in life-threatening emergency" and "The hospital is suffocating, let's save it."

Jean-Michel Carayol, a hospital technician who demonstrated in the Mediterranean port city of Marseille, said staff were "at the end of their tether and exhausted".

Monique Aubin, a 61-year-old nurse who also joined the protest, complained of a "lack of materials, even medication" and of being swamped in paperwork which left her little time for patients.

In 2000, the World Health Organization ranked France's health system the best of 191 countries.

But a study by the Institute for Health Metrics and Evaluation published in The Lancet medical journal in 2017 placed it in 15th place for quality of care.

The country is still one of Europe's biggest spenders when it comes to healthcare.

In 2016, France spent 12 percent of its GDP on health, well above the western European average of 10 percent, and was also the country where the patient's share of the health bill was the lowest.

The protests have created jitters in the government, which fears that hospital staff could band together with other disgruntled groups such as transport workers who are planning mass strike action in December over pension reforms.

Three health plans in the past two years have failed to appease the anger of beleaguered hospital staff.

In an attempt to head off another winter of discontent, a year after the start of the "yellow vest" revolt, Macron said Thursday the government would unveil plans next week for "substantial" hospital investments.

While arguing that his centrist government had inherited an ailing hospital system he said he had "heard the anger and the indignation over working conditions" in hospitals.

The protesters are demanding 3.8 billion euros in emergency investment in public hospitals -- twice the amount set aside in the draft 2020 budget currently before parliament.

France's budget deficit is expected to breach an EU limit of 3.0 percent of GDP this year, reaching 3.1 percent.