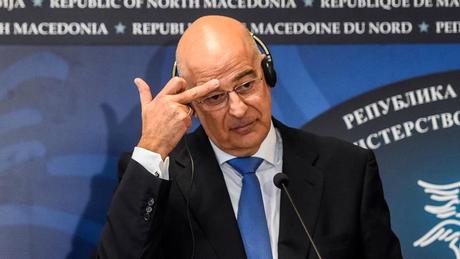 Greece's foreign ministry on Friday said it was expelling the Libyan ambassador for failing to disclose the contents of a disputed maritime jurisdiction deal with Turkey that has raised hackles in the region.

"I regret to announce that the Libyan ambassador was summoned to the ministry this morning and was informed of his expulsion," Foreign Minister Nikos Dendias told reporters, adding that the envoy had been given 72 hours to leave Greece.

Turkish President Recep Tayyip Erdogan last week met with the head of the Tripoli-based Government of National Accord (GNA), Prime Minister Fayed al-Sarraj, to sign agreements on security and military cooperation, as well as maritime jurisdictions.

Part of the deal sets a maritime boundary between the two countries, which Greece says fails to take into account the island of Crete. Cyprus and Egypt also expressed outrage.

"There are no borders between Turkey and Libya. Illegality does not produce law," Gennimatas said.

Dendias earlier this week had called on the Libyan ambassador Mohamed Younis Menfi to provide details on the deal, which Athens said he had failed to do.

Dendias insisted that the move does not constitute a break of relations with Libya.