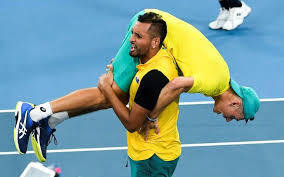 A dynamic Nick Kyrgios and dogged Alex de Minaur powered Australia into the ATP Cup semi-finals Thursday with an epic 2-1 win against the Tim Henman-led Britain, and they were joined by Russia who overpowered Argentina.

The home team clinched the tie after an 18-16 third-set tiebreaker in the doubles to set up a potential blockbuster last-four clash against Rafael Nadal's Davis Cup-winning Spain who face Belgium on Friday.

Russia, spearheaded by world number five Daniil Medvedev won both their singles to sweep past Argentina.

Their reward is a semi-final against either Novak Djokovic's Serbia, or Canada.

Australian captain Lleyton Hewitt took a huge gamble by dropping regular doubles pair John Peers and Chris Guccione in favour of Kyrgios and de Minaur, and it looked a poor decision when they lost the first set 6-3.

But, spurred by Kyrgios' booming serve, they took the next 6-3 before a nailbiting tiebreaker that lasted more than half-an-hour.

Jamie Murray and Joe Salisbury had four match points, which were all saved, with Australia finally converting on their fifth match point, sparking jubilant scenes.

"That was incredible tennis. All three matches today everyone gave 100 percent and left it all out on the court," said Hewitt.

"Really proud of the boys, the way they were able to turn it around... it could have gone either way."

In the second quarter-final, Karen Khachanov continued his hot run of form and got the ball rolling for Russia by beating an out-of-sorts Guido Pella 6-2, 7-6 (7/4).

The world number 17 has won all four of his matches this season and was in control throughout against the Argentinian, who appeared on the verge on tears in the opening set.

Medvedev, also unbeaten, quickly took charge of his showdown with world number 13 Diego Schwartzman, but lost focus in the second and was slapped with a point penalty for twice smashing his racket into the umpires chair during an argument with the official.

"The second set and third one (of Medvedev's match) was high-class tennis from both sides," Russian captain Marat Safin said, adding that he was "very proud" of his team.

"It was important for him to stay mentally strong, maintain his calm and see what's going to come."

The Australia-Britain tie was notable for Evans' clash with world number 18 De Minaur, a three-hour 23-minute contest that is a contender for match of the tournament.

After Evans took the opening set in a tense tiebreaker, De Minaur fought back to grab the second.

He went 4-2 behind in a see-saw third, but rallied again as they exchanged service breaks with the Australian showing nerves of steel to save four match points and take it to another tiebreak -- which the exhausted Briton finally won

"That's about as good as I've got really and I only got through by the skin of my teeth," admitted Evans, ranked 42.

A composed Kyrgios beat world number six Stefanos Tsitsipas on Tuesday and carried that momentum into his clash against Norrie.

The mercurial Australian has been a model of concentration and focus at the ATP Cup, thriving in the team environment.

It is partly due to having a six-month suspended ban hanging over him, imposed in September for calling an Irish umpire a "potato" and a "tool" in Cincinnati.

He also accused the ATP of being corrupt before backtracking on the allegation.

"Rusty (Hewitt) is the best captain, the teammates have been supporting each other, being there for each other and that's paid off," he added.