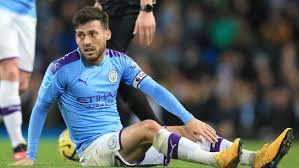 Manchester City manager Pep Guardiola hopes David Silva will be fit for next week's Champions League clash against Real Madrid after the midfielder was injured during the 2-0 win against West Ham.

Silva limped off in the closing moments at the Etihad Stadium on Wednesday after being caught by a crunching tackle from West Ham's Angelo Ogbonna.

Guardiola immediately asked Silva about the extent of the injury on the touchline and, while he does not think the problem is especially serious, there is still some doubt about his availability for the last 16 first leg in Spain next Wednesday.

"He told me that he felt something. But I don't think it was a big issue," Guardiola said.

"I will know (on Thursday) exactly. He played really well and we will see in the next days.

"He told me he had more caution after what happened near the goal. We will see with the doctors."

City's trip to the Bernabeu has taken on added focus in the wake of UEFA handing the club a two-year ban from European competitions for "serious breaches" of Financial Fair Play regulations.

Unless City win their appeal, this season will be Guardiola's last chance to win the Champions League until the 2022-23 campaign.

Like Silva, City winger Raheem Sterling is also an injury doubt for the Real showdown as he recovers from a hamstring problem suffered at the start of the month.

But Guardiola was boosted by the return against West Ham of French center-back Aymeric Laporte, who made only his second appearance since suffering a serious knee injury in August.

"I'm happy with the result and being back on the pitch at the Etihad. The people here push me to do a good job," Laporte said.

"To be back playing at home, I'm happy with that. It was difficult for me being out of the team for this long time but I'm happy to be back with my team-mates."