Over a Year of Protests in the Arab World and Iran 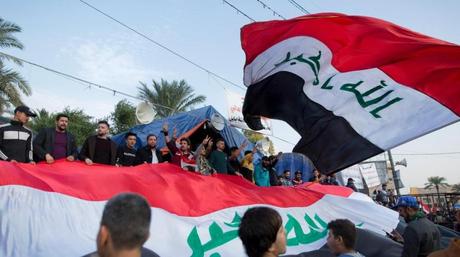 Algeria's year-old anti-government movement is among several to have rocked the Middle East and North Africa in the past year, in an echo of the region's 2011 revolts.

Here is a snapshot of the turmoil that started in December 2018 in Sudan.

Anti-government protests erupt in late 2018 against a government decision to triple bread prices. They intensify in early 2019.

On April 6, thousands of demonstrators begin a sit-in outside the army headquarters in Khartoum.

On April 11, the army says it has removed president Omar al-Bashir from power, ending his 30-years rule.

On June 3, armed men in fatigues disperse the sit-in as part of a days-long crackdown that leaves scores dead.

After weeks of negotiations, protest and military leaders on August 17 sign an accord on transitioning to civilian rule with democratic elections in 2022.

More than 250 people are killed during the months of demonstrations, according to doctors linked to the protest movement.

Demonstrations start on February 22 in key cities against ailing President Abdelaziz Bouteflika's plans to run for a fifth term after 20 years in power.

After the army withdraws its support, Bouteflika resigns on April 2.

The protest movement persists, demanding an overhaul of the entire political establishment.

Demonstrations continue despite his call for dialogue.

In September, rare protests break out in Cairo and other cities calling for the removal of President Abdel Fattah al-Sisi, the former army chief who took power in 2014.

Authorities quickly snuff out the small-scale demonstrations and embark on a crackdown.

Rights groups say around 4,000 people -- including lawyers, activists, professors and journalists -- were detained.

Hundreds of people begin demonstrating in Baghdad and cities in the south on October 1 against unemployment, corruption and poor public services.

The protests explode into violence, with thousands defying security forces.

After a two-week pause, demonstrations resume on October 24, demanding the resignation of Prime Minister Adel Abdel Mahdi's government. Anger is also directed at Iran, accused of propping up the administration.

The scale of the protests drops but they continue, demanding an overhaul of the ruling system.

Since the unrest began, more than 550 people have been killed and 30,000 wounded.

On October 17, the government announces a tax on messaging apps such as WhatsApp. Coming amid a looming economic crisis, the announcement is seen by many as a step too far.

The tax is scrapped but the demonstrations spread, with thousands gathering in Beirut and other cities to demand an overhaul of the entire political class, accused of corruption and incompetence.

Prime Minister Saad Hariri resigns on October 29 but it takes weeks for his replacement to be announced.

On November 15, protests erupt after a surprise petrol price hike and spread to dozens of urban centres, turning violent.

The authorities quickly hit back. Amnesty International says more than 300 people were killed in the crackdown, but officials reject the figures. The United Nations says at least 7,000 people were arrested.