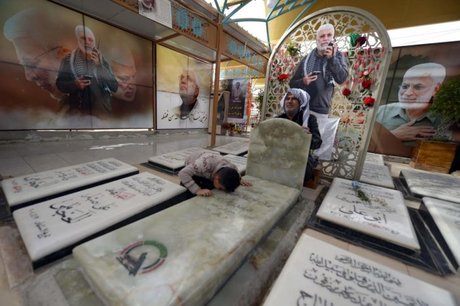 A minibus stopped outside the world's largest cemetery in the Iraqi Shiite holy city of Najaf. Five women got out, telephone cameras filming the scene, and dashed excitedly towards a grave.

Clad in black, they joined wailing women and men beating their chests in grief at Wadi al-Salam (valley of peace), an ever expanding cemetery.

All eyes were on the grave of Iraqi paramilitary commander Abu Mahdi al-Muhandis.

Killed alongside top Iranian general Qasem Soleimani in a U.S. drone strike in Baghdad on January 3, Muhandis is now revered as a martyred icon of anti-American resistance.

His grave has become a magnet for Shiites vowing vengeance against Washington.

Below a life-sized portrait of the deceased commander, a young man kneeled before his grave, the wailing of women ringing around him.

"May God avenge us from America," the man screamed.

It has become a stop for the thousands of Shiite pilgrims who pass through Najaf each day to visit the tomb of Imam Ali, son-in-law of the Prophet Mohammed.

"It is not just a grave, it has been transformed into a shrine," Abbas Abdul Hussein, a security official at the cemetery, told AFP.

Washington's number one enemy in Iraq,  Muhandis was head of the Hashed al-Shaabi, an Iraqi military network largely incorporated into the state.

He was Soleimani's top Iraqi aide and widely seen as Tehran's man in Baghdad.

The U.S. strike that killed Muhandis and Soleimani outside Baghdad airport dealt a severe blow to Tehran and its so-called axis of resistance that stretches across Iran, Iraq, Yemen and Lebanon.

Iraq's armed factions, the most hardline of which are financed, trained and armed by Iran, have vowed to avenge Muhandis' death.

But almost two months after the assassination, there has yet to be a heavy response, apart from Iranian missile strikes on January 8.

As well as the grave at Wadi Salam, a small altar has been erected at the site of Muhandis' death at the entrance to Baghdad airport.

Dressed in black from head-to-toe, Um Hussein said she made a 450-kilometer (280-mile) trek from Basra in southern Iraq to pay homage at the grave.

"Every time we come to visit (the tomb of) Imam Ali, we will make a stop to see the hero and martyr Muhandis," she said.

From the early hours of the day until after sunset, the entrance to the cemetery is bustling with minibuses ferrying visitors.

Standing over Muhandis' grave, tears rolling down her cheeks, Souad said she also came from Basra to honor the "hero" who "defeated" the Islamic State (IS) group.

"His death really affected us and the Hashed as a whole," she said.

Wadi Salam is also the final resting place of thousands of Hashed fighters killed during the 2014-2017 battle against IS.

It was on this front that Muhandis -- known for his virulent anti-Americanism long before the 2003 U.S.-led invasion of Iraq -- became a revered figure.

Muhandis, accused of involvement in deadly 1983 attacks against the French and U.S. embassies in Kuwait, oversaw the Hashed and its integration into the state.

He transformed most of his paramilitary fighters into regulars, but some have remained outside state structures, including those Washington accuses of attacking its personnel in Iraq.

Flanked by the graves of other Shiite commanders, Reza Abadi, an Iranian from Soleimani's hometown of Kerman, recited a eulogy over the grave of Muhandis.

"We came here to show our respect for this man who is dear to Iranians and Iraqis," he said. "The memory of the two martyrs, Hajj Qasem and Abu Mahdi, will never be forgotten."

What would a pro-US magnet be? Hillary Clinton?