Iraqi Lawmakers Schedule Confidence Vote amid US Calls for Protection 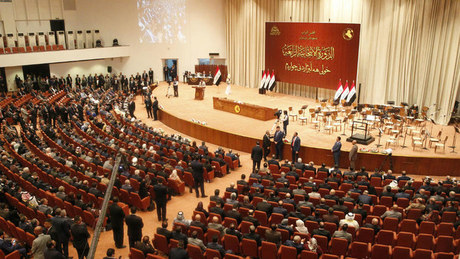 Iraqi lawmakers on Monday scheduled a confidence vote for the government of prime minister-designate Mohammad Allawi later this week, as the US called for the premier to protect its troops.

Allawi, who was named as a consensus candidate by Iraq's divided political parties on February 1, had called for a Monday vote, following months of protests demanding a complete government overhaul.

His request was backed by his predecessor Adel Abdel Mahdi, deputy parliament speaker Hassan Karim al-Kaabi, and Shiite cleric Moqtada Sadr who threatened to organise mass rallies outside parliament unless lawmakers back Allawi's government in a confidence vote this week.

Lawmakers decided to schedule the vote for Thursday, according to a statement from parliament.

The current legislature is Iraq's most divided in recent history, with major factions split over the fate of the roughly 5,200 US troops stationed in Iraq.

US Secretary of State Mike Pompeo on Sunday urged Allawi to protect US troops, in the first substantive US comment on the premier since his appointment.

Pompeo said he told him by telephone that the United States backed a "strong, sovereign and prosperous" Iraq.

He "stressed Iraq's obligation to protect US and coalition diplomats, forces and facilities," State Department spokeswoman Morgan Ortagus said in a statement.

Pompeo also emphasised "the urgency with which Iraq's next government must put an end to the killing of protesters, seek justice for those killed and wounded, and address their legitimate grievances," she said.

His remarks came as one protester was killed Sunday by live fire in Tahrir Square -- the beating heart of the capital's protest movement.

Since demonstrations started in October, around 550 Iraqis have been killed and 30,000 others wounded, mainly protesters.  An AFP photographer was among those wounded last week, shot in the leg by security forces.

But security forces say they are not behind attacks on protesters, blaming unidentified gunmen.

The United States last month outraged Iraqi leaders by killing top Iranian general Qassem Soleimani in a drone strike at Baghdad airport, an attack widely seen as a violation of Iraq's sovereignty and sparking demands for US forces to leave.

US leaders have scoffed at Iraqi objections to Soleimani's killing.

President Donald Trump threatened economic sanctions if Baghdad evicted the 5,200 troops in the country, which was thrown into chaos by the 2003 US invasion that toppled dictator Saddam Hussein.

Pompeo refused a request by outgoing prime minister Abdel Mahdi to send a delegation to discuss a troop withdrawal, saying that many Iraqi leaders privately want US forces to stay.

Abdel Mahdi stepped down in December in the face of unprecedented anti-government protests demanding an end to corruption, an independent prime minister and a total government overhaul.

But protesters have slammed the choice of Allawi as his successor, saying the two-time former communications minister is too close to the elite they want to see ousted.

The parliament says the troops should leave, so the US replies, "Please defend our troops."