Northwest Syria Schools Close after Some Hit in Strikes 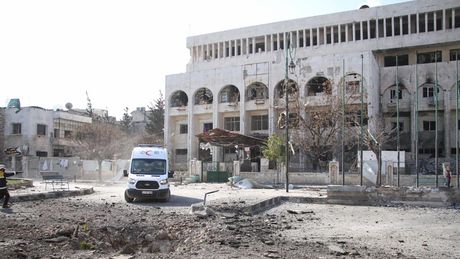 Russia-backed regime forces have since December pressed a deadly assault against the last major rebel bastion of Idlib, retaking town after town and displacing hundreds of thousands of people.

The Syrian Observatory or Human Rights war monitor said strikes targeted four schools in the region on Tuesday, while aid groups, including Save the Children, claimed up to 10 were hit.

"Due to the bad security conditions, classes have been suspended until the end of the week in all schools in Idlib city," the education directorate said in a statement.

The same applied to districts in southern and eastern Idlib province, it said.

The Britain-based Observatory said a schoolchild and three teachers were killed when a school was hit in Idlib city on Tuesday.

Another school that was targeted in Maaret Misrin had been turned into a shelter for the displaced, it said.

Amnesty International condemned Tuesday's bombardment, citing the reports that 10 establishments had been hit.

"Targeting schools and kindergartens being used for civilian purposes is a war crime," the rights group's Heba Morayef said.

"These attacks form part of a well-established pattern of systematically attacking the civilian population and constitute crimes against humanity," she said.

Save the Children has also called for schools to be spared.

"Schools must be safe havens for children, even in a conflict zone," the charity's Syria response director, Sonia Khush, said on Tuesday.

The "attacks are another sign that fighting in northwest Syria has reached catastrophic levels of violence against children and civilians... Nowhere is safe, not even school", she added.

The violence in northwestern Syria has sent more than 948,000 people fleeing from their homes and shelters in the bitter cold, more than half of them children, according to the United Nations.

The force that has controlled the Idlib region in recent years is dominated by Hayat Tahrir al-Sham, a jihadist group led by ex-members of Al-Qaeda's former Syria franchise.

Many of the crowded territory's residents are civilians who were forced from their homes in earlier phases of a war that has displaced more than 11 million people since 2011.