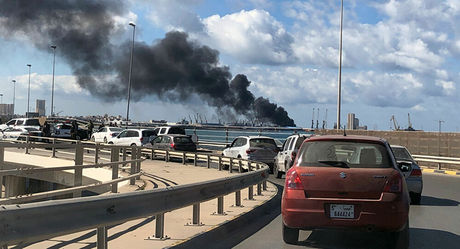 U.N.-hosted talks between the warring sides in Libya that were supposed to start on Wednesday were clouded in uncertainty after participants said they were staying away.

The talks are meant to be between representatives of the U.N.-recognized government in Tripoli and the eastern-based parliament backed by military commander Khalifa Haftar.

U.N. Support Mission in Libya spokesman Jean Alam told AFP that the political talks -- part of a U.N.-backed process -- had "kicked off" in Geneva on Wednesday.

But Abdulhadi Lahweej, foreign minister of the eastern government, said on Wednesday that his side's participation "for the moment is suspended."

He said the U.N. was trying to "impose" representatives.

"There is no precondition. What we want is that all the people in the negotiations table must be representative of the Libyan people," he told reporters in Geneva, adding that his side was willing to make "concessions."

The High State Council, the equivalent of a senate which backs the Tripoli-based unity government, on Tuesday had said it too would not participate in the talks until progress was made in military negotiations.

Libya has been rocked by violence since a NATO-backed uprising in 2011 overthrew and killed veteran strongman Moammar Gadhafi.

Haftar's forces launched an offensive against Tripoli, seat of the U.N.-recognized Government of National Accord (GNA), last April.

His fighters have since stalled on the edges of the capital, but fighting has left more than 1,000 people dead, according to the UN.

A joint military commission with five members from each side wound up talks in Geneva on Sunday with a "draft ceasefire agreement" to be finalized in March, according to the U.N. mission.

I think you mean "smoked".