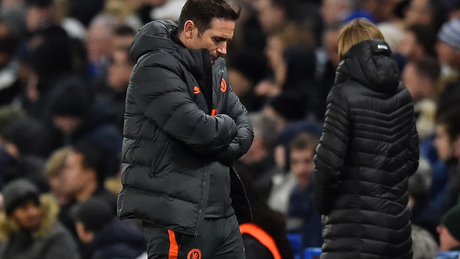 Chelsea manager Frank Lampard admitted a 3-0 thrashing at home to Bayern Munich in the first leg of their Champions League last 16 tie was a reality check for how far behind the European elite the Blues now find themselves.

Lampard captained the Chelsea side that beat Bayern on home soil in the 2012 final, but the gulf between the teams that has emerged in recent years was in full evidence at Stamford Bridge.

Serge Gnabry's quickfire double early in the second half was just reward for Bayern's dominance of the first 45 minutes when only some poor finishing and Chelsea goalkeeper Willy Caballero kept the hosts in the game.

Robert Lewandowski then added the final blow 14 minutes from time with his 11th Champions League goal of the season.

"Sometimes you have to brutally honest about it," said Lampard. "They outclassed us in pretty much every department. It's quite sobering.

"Am I surprised? I think we could have done more. They showed the level of team they are, hence why they challenge at the top of the Bundesliga and the Champions League year in, year out."

Chelsea remain in pole position to qualify for the Champions League again next season as they sit fourth in the Premier League.

However, a run of five wins in their last 15 league games was a warning that Chelsea would struggle to compete with the best in the knockout stages of the Champions League.

"It's a real reality check," added Lampard. "For everybody in the dressing room, take that one on the chin, look yourself in the mirror and just look at the levels that we want to attain at this club.

"This club has attained (those levels) in the past and we want to work to get back there."

Lampard refused to call the second leg in three weeks time a dead rubber. But after being frustrated at not being able to add a striker to his squad in January, he appeared to put pressure on the club's hierarchy to back him in the transfer market this summer.

"We'll always play with pride. You should never say the door is closed because our fans wouldn't accept that and rightly so," he added on the second leg.

"I'm more concerned about the bigger picture here. How quickly can we recover for the Premier League at the weekend? But also will we look at that and understand what we need to do to get to where we want to. For everybody here there is a lot to be done."