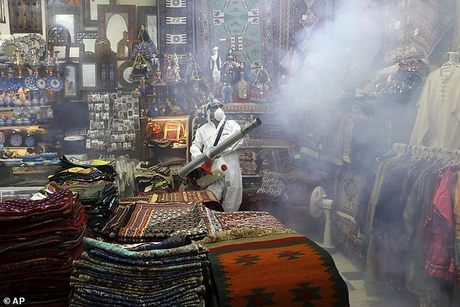 Iran said Friday the security forces will clear the streets nationwide within 24 hours so all citizens can be checked for coronavirus -- its toughest measure yet to combat the outbreak.

Since it announced the first deaths last month, Iran has shut schools, postponed events and discouraged travel ahead of Nowrouz, the country's New Year holidays.

But despite those and other measures including the cancellation of the main weekly Friday prayers, the official number of deaths and infections has continued to grow exponentially.

Iran's supreme leader on Thursday ordered the armed forces to lead the battle against the outbreak.

Ayatollah Ali Khamenei instructed the security forces to bring their services together and expand efforts to combat the virus.

Among other top brass at the gathering was Gholamreza Soleimani, who heads the Basij, a volunteer militia loyal to the establishment, as was Defense Minister Amir Hatami.

Bagheri appeared in front of the cameras later to say a newly formed commission had been charged with overseeing the "emptying of shops, streets and roads" within the next 24 hours.

"During the next 10 days, the entire Iranian nation will be monitored once through cyberspace, by phone and, if necessary, in person, and those suspected of being ill will be fully identified," he said.

It was difficult to estimate on Friday the real extent of the measures announced by the general.

News of the lockdown came as Iran said the novel coronavirus had claimed another 85 lives, its highest single-day toll since the first deaths were announced on February 19.

"Sadly, 85 people infected with the COVID-19 disease have died in the past 24 hours," health ministry spokesman Kianoush Jahanpour said.

"Across the country, at least 1,289 infected people have been added to the list of confirmed patients."

In all, the ministry says 514 people have been killed by the illness out of 11,364 confirmed cases of infection in Iran.

Several politicians and officials have been infected, with some dying from the illness.

Velayati fell ill with "mild symptoms" on Wednesday and has been placed in quarantine, according to Tasnim news agency.

Iran on Thursday said it asked the International Monetary Fund for its first loan in decades to combat the coronavirus outbreak.

Foreign Minister Mohammad Javad Zarif urged the IMF to "stand on the right side of history."

Zarif also appealed to the United Nations for an end to US sanctions, which he said were "undermining our efforts to fight the COVID-19 epidemic in Iran".

The United States is currently pursuing a policy of "maximum pressure" aimed at crippling the Iranian government's finances.

President Donald Trump launched the campaign in 2018 after unilaterally withdrawing the U.S. from a nuclear deal between Iran and world powers and reimposing sanctions.

In theory, humanitarian items are exempt from the US sanctions, but in reality banks tend to turn down transactions involving Iran to avoid being exposed to potential litigation.

The World Health Organization praised Iran as a delegation of WHO and public health experts left the country after a five-day mission.

"We see that Iran's strategies and priorities to control COVID-19 are evolving in the right direction," said Richard Brennan, WHO regional emergency director.

"But more needs to be done," he said in a statement.

"We agreed on several priority areas for scale-up with the national health authorities, based on informed experiences in China and elsewhere."