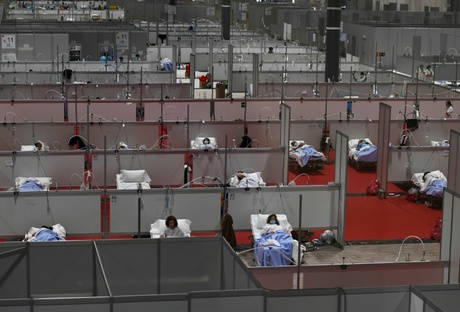 In the three months since China first came across a new coronavirus, the world has been plunged into turmoil.

A pandemic has been declared, schools and shops from New York to New Delhi shuttered, half the global population is confined in some form, while governments have scrambled to announce massive aid packages amid recession fears.

Here is a look back at the dramatic first months of 2020:

On January 8, 2020, the World Health Organization (WHO) says cases of pneumonia reported since December in the central Chinese city of Wuhan, could be due to a new coronavirus strain.

In December, 59 people are officially diagnosed with the illness, which can cause serious respiratory problems. The confirmed cases include several employees from a Wuhan market selling live animals for food.

A first virus death is announced on January 11 in China and the epidemic spreads across provinces, and then beyond the borders of the mainland.

France is the first country to report a case in Europe, at the end of January. The early infections are found in people either from China or who have recently returned from there.

The illness, at this stage generally described as a form of flu, appears particularly dangerous for older or more vulnerable people.

In the hope of slowing the spread of the epidemic, Chinese authorities take the radical step of confinement, first locking down the city of Wuhan and then, on January 25, the whole of Hubei province, cutting off its 56 million people from the rest of the world.

Other countries begin repatriating their citizens and putting them under quarantine on arrival home.

At the end of January, with almost 6,000 cases officially recorded in mainland China, the number of infections from the new coronavirus overtakes that of SARS.

The WHO declares a global health emergency, but it stops short of recommending trade and travel restrictions.

Thousands of people are stuck on several cruise liners after cases are detected on board. More than 3,700 are quarantined from February 5 on a ship off Japan's coast and more than 700 infections emerge among the passengers and crew in a few weeks.

Early February researchers in China identify the pangolin, a scaly endangered mammal, as the potential link that facilitated the spread of the virus from bats to humans.

When Li Wenliang, a 34-year-old ophthalmologist in Wuhan succumbs to the disease, his death unleashes a wave of anger in China at authorities.

The doctor was among a group of people who sounded the alarm about the virus in late December, only to be reprimanded and censored by the authorities in Hubei province.

The US raises criticisms over what it calls a lack of transparency from China in its response to the outbreak, but the WHO defends Beijing, listing the ways it has collaborated with the international community.

Although much remains unknown about the new coronavirus, the disease gets a new name: "COVID-19".

The first death outside Asia is announced on February 15, in France.

Around the world concerns are raised about the economic repercussions, as international meetings and sports competitions are progressively cancelled.

On March 24, the International Olympic Committee takes the historic decision to postpone the Summer Games in Tokyo to 2021 instead.

By the end of February, the number of infections is rising, notably in Italy, South Korea and Iran. Chinese authorities believe the epidemic is reaching a peak on the mainland.

Hard-hit Italy is the first country after China to impose strict confinement measures on its population.

On March 11, the WHO declares COVID-19 a "pandemic" and urges the world to take action.

The US begins sealing its borders to foreign visitors from Europe.

- Half of humanity confined -

The WHO declares Europe the new virus epicentre and through the month of March, Spain, France and Britain impose their own confinement measures.

Several countries worldwide follow with various forms of lockdown, while the number of deaths continues to rise and overstretched hospitals struggle to cope.

By April 2, half of the world's population is called on or obliged by their authorities to stay at home.

Curfews and states of emergency multiply in various countries, sparking fears over the erosion of civil liberties.

Flights are grounded, schools and universities are shuttered, and working from home is the new norm.

In Madrid, an ice rink is turned into a morgue. In New York, emergency field hospitals are opened in Central Park.

In poor, overcrowed neighbourhoods, limiting movement proves difficult to enforce and some officials use violence and gunfire to disperse crowds.

Most countries experience shortages of masks and other protective medical equipment, sparking competition for resources.

There are worries too of intensive care units being overcrowded, and shortages of drugs and medical staff.

South Korea also tracks cases through use of technology, which is more difficult to employ in countries with stricter privacy laws.

As the hunt for a vaccine goes on -- unlikely to be available before at least a year -- several countries experiment with the use of anti-malarial drugs such as chloroquine, but experts urge caution until bigger trials validate their effectiveness.

While most of those infected with the virus recover, the illness can cause serious pulmonary complications, even in young patients.

Children had been considered safe from the more serious conditions, but rare cases of adolescent deaths in France, Belgium and Britain spark concern. Two babies die from COVID-19 in the US.

Retirement homes are hit hard as the virus sweeps through.

Among the famous names that start appearing on the list of deaths is the 86-year-old Afro-jazz legend Manu Dibango.

And those infected include British Prime Minister Boris Johnson, who remained in charge of the government despite being admitted to hospital for tests after suffering "persistent symptoms", the heir to the British throne Prince Charles, and Hollywood actor Tom Hanks, who has now recovered.

The coronavirus pandemic is the worst global crisis since World War II, the UN says at the end of March. It could trigger conflicts around the world and an economic recession "that probably has no parallel in the recent past".

World powers promise billions of dollars to restart the world economy, which has been mostly brought to a standstill, while unemployment claims in the US soar to new records.

Hubei province and its capital Wuhan begin to open up after a months-long lockdown, but Italy, the country with the biggest death toll, tops 10,000 fatalities at the end of March, shortly followed by the same in Spain.

A quarter of global infections are in the US.

At the start of April, as the world toll tops more than a million infections and 60,000 dead, questions are raised over what will come next.

Could there be a second wave of infections, when restrictions are lifted? Has China minimised its official death toll of more than 3,000, as claims the US? What of the economic impact, and that on democracies worldwide?