Massive India Repatriation to Begin with Flights from UAE 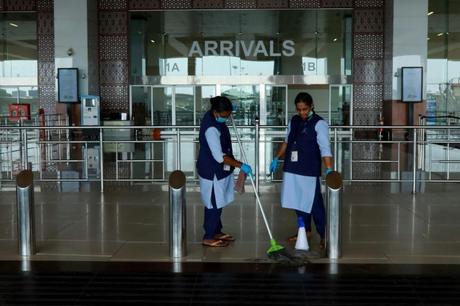 The first wave of a massive exercise to bring home hundreds of thousands of Indians stuck abroad was under way Thursday, with two flights preparing to leave from the United Arab Emirates.

India banned all incoming international flights in late March as it imposed one of the world's strictest virus lockdowns, leaving vast numbers of workers and students stranded.

Some 15,000 nationals will be repatriated from 12 countries on planes and naval ships, in a mammoth exercise which saw the civil aviation ministry's website crash Wednesday as panicked citizens rushed to register.

Two warships have steamed to the Maldives and another to the UAE -- home to a 3.3-million-strong Indian community which makes up some 30 percent of the Gulf state's population.

The consulate in Dubai said that it alone had received almost 200,000 applications, appealing on Twitter for "patience and cooperation" as India undertakes the "massive task" of repatriation.

As Indian citizens with coveted tickets arrived at Abu Dhabi and Dubai airports for the first two flights Thursday, the consulate said medical assessments were under way and that so far all passengers were cleared in antibody tests.

"The results came out in 10 minutes. Mine has been negative. I'm super relieved," one 40-year-old passenger at Abu Dhabi airport told AFP.

"I've lost my job in the company I was working with. I'm feeling a bit weird going home -- while I'm happy that I am going home there is also a sense of uncertainty."

The oil-rich Gulf is reliant on the cheap labour of millions of foreigners -- most from India, Pakistan, Nepal and Sri Lanka -- many of whom live in squalid camps far from the region's showy skyscrapers and malls.

But coronavirus and the devastating economic impact of the pandemic has left many workers sick and others unemployed, unpaid and at the mercy of sometimes unscrupulous employers.

The two flights from the UAE -- both destined for the southern Indian state of Kerala -- will transport just 354 people, and a flight planned from Doha Thursday has been postponed until the weekend.

According to Indian media reports, delays in the flight schedule have been triggered by the need to test air crew for coronavirus.

A naval vessel is expected to arrive at Dubai's Port Rashid, and the Indian High Commission in the Maldives posted images on Twitter of one of its warships entering Male harbour ahead of Friday's planned evacuation of some 1,000 people.

Other flights will leave Singapore, Malaysia and the Philippines, as well as London in the United Kingdom and San Francisco, New York, Chicago and Washington in the US.

But frustrations have boiled over at the slow pace of the exercise, as well as the fact that evacuees will have to pay for their passage home and spend two weeks in quarantine on arrival.

"There are so many people who have lost their jobs here -- they're literally going hungry," Yasin, a 50-year-old restaurant manager who is now out of a job, told AFP from Dubai airport.

"And now the government has asked for people to pay for the tickets. I sincerely want to request the government to waive that. They should protect their people. People do not have money to survive here, paying for flights is not possible at all."

Those who haven't managed to get a ticket home voiced their frustrations in a torrent of posts on social media.

"It is just propaganda," said Ishan, an Indian expatriate in Dubai. "Let's say they repatriate 400 people on the first day, and about 5,000 people in 10 days, what difference has it made?"

"We are upset over the failure of our government," said the 35-year-old, who was a manager at a luxury services company before he was made redundant last month.

"What about the people with no money? How are you helping them?"