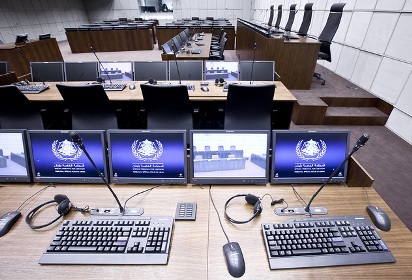 Special Tribunal for Lebanon Pre-Trial Judge Daniel Fransen has made a progress in preparing the indictments in the assassination attempts of MP Marwan Hamadeh and ex-Defense Minister Elias Murr, and the murder of former Communist party leader George Hawi, Lebanese sources said Friday.

The informed sources told pan-Arab daily al-Hayat that STL Prosecutor Daniel Bellemare has referred to Fransen his probe into the three cases and that the pre-trial judge is preparing the indictments pending their release.

The court has already indicted four Hizbullah members in ex-Premier Rafik Hariri’s Feb. 2005 assassination. But Lebanese authorities have so far failed to arrest them.

In August, Fransen linked the three attacks on the Lebanese politicians to Hariri’s murder.

According to the tribunal’s statute, a case is connected to the 2005 attack if it is of a "similar nature and gravity" and has a number of elements in common with it, such as “the criminal intent (motive), purpose behind the attacks, the nature of the victims targeted, the pattern of the attacks (modus operandi) and the perpetrators.”

According to Article 1 of the statute, the tribunal has jurisdiction over attacks that occurred in Lebanon between Oct. 1, 2004 and Dec. 12, 2005 but only if their connection to the Hariri attack is determined by the pre-trial judge.

Al-Hayat’s sources said that Bellemare’s expected visit to Beirut next week is not linked to the indictments that could be issued in the three cases in the coming weeks.

They stressed that he would come to Lebanon for a farewell visit to top officials, including Hamadeh, Murr and the families of Hawi and Hariri.

Bellemare informed U.N. Secretary General Ban Ki-moon last month that he will not seek reappointment to his post on Feb. 2012 due to health reasons.

Clock is ticking, ya Nasrallah...yalla...pack your bags for that beautiful oasis of Iran....bye bye...

yeah I think so too I think he will do better then being in that rat hole in dahiye. when the rotten rat will leave mass clean up will begin.