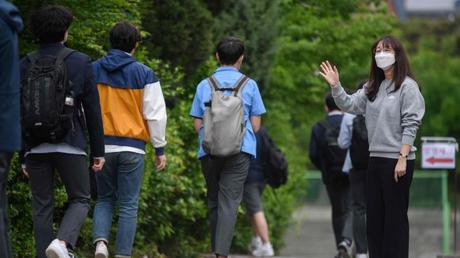 North Korea will reopen schools this month after shuttering them over the coronavirus pandemic, reports said Monday.

Pyongyang has not confirmed a single infection but has imposed strict rules, including closing its borders and putting thousands of its people into isolation.

The new school term -- initially scheduled to start early April -- has been repeatedly postponed, although some universities and high schools were allowed to resume classes in mid-April.

"New semesters will begin at elementary, middle and high schools nationwide from early June, and quarantine measures have been put in place for the reopening of nurseries and kindergartens," Yonhap news agency reported, citing the North's state radio.

"Education authorities have been asked to furnish thermometers and hand sanitisers at every gate of schools and classrooms and offices, while workers at schools and nurseries have been advised to stick to anti-virus principles," it added.

Analysts say the North is unlikely to have avoided infections from the virus, which first emerged in neighbouring China and went on to sweep the world, and that its ramshackle health system could struggle to cope with a major outbreak.

The number of coronavirus infections worldwide has risen to more than 6.1 million, with around 370,000 dead across 196 countries and territories.