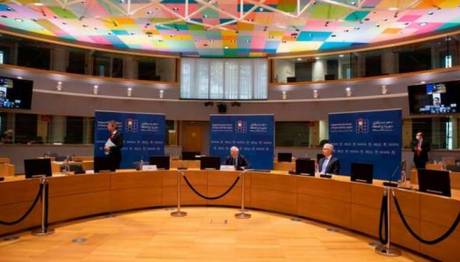 "The Brussels IV conference on Syria and the statements issued by its participants make it clear that the United States and the European Union... are continuing their hostile policies towards Syria," said a foreign ministry statement published by the official SANA news agency.

"Syria denounces such conferences, which are considered a blatant interference in Syria's internal affairs," it added.

The Brussels IV conference, hosted by the European Union and United Nations on Tuesday, saw international donors pledge $7.7 billion to  assist war-affected people inside and outside the country.

The Syrian government was not invited to the conference, nor were any opposition representatives.

The country's war has killed more than 380,000 people and displaced nearly half of the pre-war population since it started in 2011.

The future of the Syrian people "is still held hostage and Europe cannot and will not look away," said EU foreign policy chief Josep Borrell.

The previous donors' conference for Syria in 2019 had raised nearly $7 billion in pledges.

The latest commitments came as a fresh wave of US sanctions against Syria took hold in June, exposing anyone doing business with President Bashar al-Assad's government to travel restrictions and financial sanctions.

The latest designations targeted 39 people or entities, including Assad and his wife Asma.

A spate of sanctions against Syria by the US and the EU since 2011 have compounded a major economic downturn that has seen the value of the Syrian pound plunge to record lows against the dollar on the black market.

The nosediving currency has sent prices soaring in a country where the UN says nine out of 10 people now live in poverty.

Wednesday's foreign ministry statement said Western powers "that impose successive sanctions impacting the life of citizens and their livelihoods... cannot claim in any way possible that they are seeking to benefit the Syrian people."

They prefer to smuggle drugs instead of getting donor money

"The Syrian government was not invited to the conference, nor were any opposition representatives." What a farce!

to address the country's humanitarian challenges

I don't think the Assad's have ever been characterized as humanitarians, and to be frank, they are worse for Lebanon than Israel, so eff them and their supporters.

Only those who collaborated with Israel (who deserve death) say Syria is worst than Israel. That has nothing to do with Assad. We are talking about the Syrian PEOPLE where 1/3 of Lebanese have Syrian relatives.

You have your priorities wrong, but then again, you are not a thinker, but a parrot

"Only those who collaborated with Israel (who deserve death) say Syria is worst than Israel".

ANYONE who collaborates with ISRAEL OR SYRIA should be put to death---why stop at one when the other is MUCH MUCH worse. Stop trying to avoid history and look at the reality of the situation. Anyone smuggling goods into Syria, should be shot. End of story.