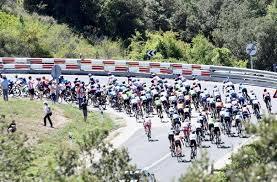 UAE Team Emirates have withdrawn three of their cyclists from the Tour of Burgos as a precautionary measure after the trio had been in contact with someone outside the race who tested positive for coronavirus.

The team were previously in the spotlight in late February when the last two stages of the UAE Tour were scrapped, with two of the outfit's stars testing positive for the virus and being quarantined.

The three riders who failed to show up at the starting line for stage two in Spain on Wednesday are Sebastian Molano, Cristian Munoz and Camilo Ardila.

"The three Colombian athletes on Saturday had been in recent contact with a person who turned out to be positive for COVID-19 yesterday (Tuesday)," UAE Team Emirates said on their website.

"Following the protocol of the team and the UCI, the three riders were isolated, sent home and will all undergo another test."

All three riders returned negative tests in the days prior to the race, the team added.

The Tour of Burgos is the first professional cycling race since the March cancellation of the final stage of the Paris-Nice.

The pair are both in Spain for this week's race.

Ahead of Tuesday's first stage, the Israel Start-Up Nation team pulled out riders Itamar Einhorn and Alex Dowsett as a precaution as they had been in contact with an asymptomatic but coronavirus positive teammate.