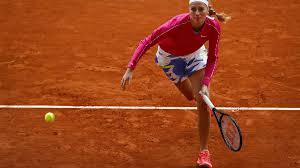 Petra Kvitova returned to the French Open quarter-finals for the first time in eight years on Monday while Novak Djokovic continued his bid to become the first man in half a century to win all four Grand Slam titles twice.

Two-time Wimbledon champion Kvitova is through to the last eight at Roland Garros for just the second time. Her best run in Paris came when she reached the semi-finals in 2012.

"After eight years to be in the quarter-final again, it's great. I'm really happy for that, that I'm still able to play on all surfaces," said Kvitova.

"When the roof is closed it's like being indoors and I really love to play."

Stefanos Tsitsipas overcame an eye problem to become the first Greek man to reach the last eight of the French Open with a 6-3, 7-6 (11/9), 6-2 win over Grigor Dimitrov of Bulgaria.

The 22-year-old will now take on Andrey Rublev in a repeat of the recent Hamburg final which was won by the Russian.

Fifth seed Tsitsipas has won 12 successive sets at the tournament having been two sets down to Jaume Munar in the opening round.

In a match which featured 12 breaks of serve, the 22-year-old Rublev had been a break down in the second and third sets. He also had to save three set points in the fourth.

"I knew it would be tough," said Rublev who arrived in Paris having reached his second US Open quarter-final last month.

"I had a little bit of luck today. There was a lot of wind so you are going to lose your serve a lot in those conditions."

- Can anyone beat Djokovic? -

Later on Monday, world number one and 2016 French Open champion Djokovic plays 15th seed Karen Khachanov, who claimed his biggest win to date against the Serb in the French capital.

Djokovic is into the Roland Garros last 16 for a record-equaling 11th successive year and is chasing an 18th Grand Slam title.

The Serb has dropped just 15 games in three rounds, improving his record this season to 34 wins against one loss -- his US Open disqualification.

Khachanov upset Djokovic in the final of the 2018 Paris Masters and is attempting to reach quarter-finals here for the second time in a row.

"Maybe mentally you know that you beat him in this particular match, for sure it gives you the confidence inside to know that you've done it already once at least," said Khachanov.

"That's the only thing that might help on a mental preparation to be ready for whatever happens."

World number 186 Altmaier is just the fourth man in 20 years to reach the round of 16 on his Grand Slam debut.

Only four seeds remain in the women's draw, with No. 4 Sofia Kenin the second highest left behind third seed Elina Svitolina following the exit of title favourite Simona Halep.

"I feel like I'm playing well at the Slams," said Kenin, who has made the last 16 or better at the three majors this season.

"It's not easy, everyone is playing their best tennis at the Grand Slams. But I definitely feel like I should get deep in a tournament."

Ons Jabeur is targeting a second quarter-final in three Slams after becoming the first Arab woman to make the fourth round here.