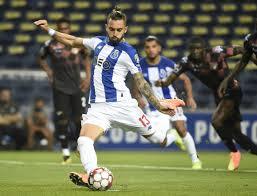 Manchester United responded to their defensive woes by signing Brazil left-back Alex Telles from Porto for a reported initial fee of 13.5 million ($14.8 million) on Monday.

Telles agreed a four-year contract, with the option to extend by a further year, just 24 hours after United were thrashed 6-1 by Tottenham.

The 27-year-old is set to replace Luke Shaw at left-back as United manager Ole Gunnar Solskjaer tries to plug the holes in his leaky defense.

"To join a club with the prestige of Manchester United is a huge honor. You have to work hard to get to this moment in your career and now I am coming to this club, I can promise that I will give everything in my heart to be a success here," Telles told United's website.

"I won many trophies at FC Porto and I want to continue that at United. The manager has a clear plan and direction for this team and I can't wait to pull on the famous shirt."

Solskjaer added: "First and foremost, I welcome Alex to United. He is a player we have been tracking for some time and his performances over the past few years are exactly what we are looking for.

"He is a fighter and a winner and will add real determination and competition to the squad.

"Alex has the qualities, both as a player and as a person, that we want here at Manchester United."

Telles, who won league titles among a number of honours at both Porto and Turkish side Galatasaray, is United's second major signing since the end of last season following the arrival of Ajax midfielder Donny van de Beek.