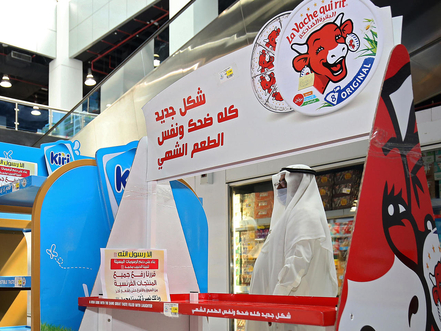 Calls for the Muslim world to boycott French goods over arguments over Islam and freedom of speech appeared Tuesday to have had "limited" uptake in the Middle East and North Africa.

The boycott was called after French President Emmanuel Macron last week defended the right to mock religion, following the murder of a French schoolteacher who had shown his class cartoons of the Prophet Mohammed.

On Monday, Turkish President Recep Tayyip Erdogan joined calls for people to spurn French goods, but only a few isolated boycott actions were recorded across the Middle East and North Africa.

In the mainly Arab Beit Hanina neighborhood in east Jerusalem, a sign on the cheese and cold meat section of one supermarket said that "French products have been withdrawn."

Meanwhile, an employee filled a trolley with cheese and butter to clear the shelves.

"We will only hand them over when Macron apologizes," the employee told AFP.

French products such a cheese and butter are often out of the price range of ordinary citizens.

But in war-torn Yemen, the poorest country on the Arabian Peninsula, French products were withdrawn from a supermarket in Sanaa.

French goods were pulled from some supermarket shelves in Kuwait, Jordan, Qatar and Egypt.

However, demonstrations against the French government are more numerous, including outraged protesters who burned flags or posters of Macron in Libya and Syria.

Macron has also drawn fire in Pakistan and Morocco, while the Palestinian Islamist group Hamas, the Taliban in Afghanistan and the Lebanese Shiite movement Hizbullah have also spoken out against France.

And here were we for many years being indoctrinated that Islam is the "religion of peace".

Presumably you are talking about yourself.
Another person who is trying to drag Lebanon down and back by 50 years instead of trying to look forward to an era of economic stability and peace.