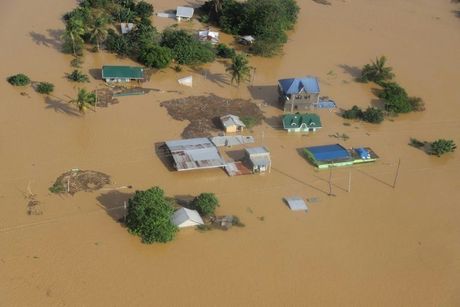 Storm Vamco barreled into Vietnam on Sunday, damaging buildings and injuring at least five people, as the death toll in the Philippines climbed to 67.

The storm made landfall on Sunday morning with reported winds of up to 90 kilometers per hour (56 mph), uprooting trees and blowing the roofs off houses and schools.

Vamco is the latest in a series of storms that have pummeled Vietnam over the past six weeks, causing flooding and landslides that have killed at least 159 people and left 70 others missing.

Initial reports from the Disaster Management Authority on Sunday said that five people were injured while they were trying to secure their houses.

Vamco has weakened since hitting the Philippines as a typhoon with winds of up to 155 kph, but state media said it had still caused significant damage.

Pictures showed seafront restaurants in the tourist hotspot of Hoi An -- a UNESCO world heritage site -- ripped apart by the storm, and huge trees uprooted in the old imperial city of Hue.

Authorities evacuated nearly 650,000 people from seven coastal provinces to higher and safer ground before the storm hit, but on Sunday warned of the danger of landslides triggered by the heavy rains.

Vamco was the deadliest storm to hit the Philippines this year, killing at least 67 people across the main island of Luzon in recent days and affecting some 1.7 million around the country.

The storm triggered some of the worst flooding in years, swamping villages, destroying crops and leaving hundreds of thousands without power.

Rescue teams and emergency supplies including food were dispatched to the northeast Philippines on Saturday where swathes of the region were inundated. The situation was made worse by the release of water from a dam.

Vice President Leni Robredo said Sunday that the waters were now receding after visiting Cagayan province, giving hope that the worst may be over for the storm-battered country.

"Situation is so much better. Many areas still flooded but water receded already," Robredo tweeted.

In Vietnam, weeks of severe weather have damaged or destroyed more than 400,000 homes, according to the International Federation of Red Cross and Red Crescent Societies.

Roads and bridges have been washed away, power supplies disrupted, and crucial food crops destroyed, leaving at least 150,000 people at immediate risk of food shortages.