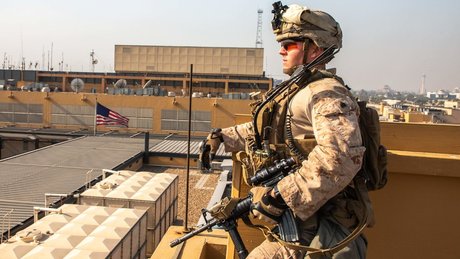 Eyeing Washington's withdrawal of 500 more troops from Iraq, pro-Iran factions have boldly resumed attacks on the U.S. embassy there despite suspicions outgoing President Donald Trump could strike back.

Just as the U.S. was announcing it would further shrink its roughly 3,000-strong force, a volley of rockets targeted the American diplomatic compound in Baghdad late Tuesday.

The attack ruptured a truce agreed last month that put a stop to a year of rockets and roadside bombs on Western interests across Iraq, which both U.S. and Iraqi officials have blamed on hardline groups close to Tehran.

While no group claimed the latest attack, sources within that network of factions, which calls itself the "Islamic Resistance," admitted to AFP that they were involved.

With the US drawing down, a White House handover two months away and an Iraqi premier hostile to them, the factions recalculated and ramped up, experts said.

"It's a clear escalation," said Hamdi Malik, an expert on Iraqi paramilitary groups.

While the groups had previously "aimed to miss, fearing retaliation," Tuesday's attack used the heavier and more accurate Grad rockets, he told AFP.

"It's a message to both the U.S. and Prime Minister Mustafa al-Kadhemi, who they see as an American stooge," he added.

Kadhemi has vowed to end rockets raining down on foreign and Iraqi installations, but the "Resistance" factions sought to project their invincibility and staying power.

"They want to show that they are powerful and will stay even if the Americans leave," said Malik.

Over the past year, the US had already decreased its troop levels in Iraq from around 5,000 to 3,000 following its assessment that the Islamic State group posed less of a threat to the country's stability.

"We are now in phase four, which is the final phase," Hussein said in comments to reporters.

Tehran has long insisted U.S. troops must leave the region, doubling down on that call after an American drone strike killed top Iranian general Qasem Soleimani in January.

That attack also killed the deputy head of Iraq's paramilitary Hashed al-Shaabi network, which has pushed for a U.S. withdrawal and a halt to U.S. drone surveillance of Iraq.

The raid was ordered by Trump, who has waged a maximum-pressure policy against Iran since 2018.

With two months left to go for the Trump administration, Iran has spotted a window of opportunity, said Ramzy Mardini of the University of Chicago's Pearson Institute.

"The fact that there is certainty now that Trump has an expiration date gives Iran the space to escalate," he said.

President-elect Joe Biden has signaled he wants to return to diplomacy with Iran after Trump abandoned the nuclear deal in 2018, which could mean lifting crippling sanctions on Tehran.

Ramping up now, Mardini said, could grant Iran "negotiating power as the next administration takes office (and) as the US shifts from maximum pressure to rapprochement."

It would also present Biden with a fait accompli when it comes to troop drawdowns, said Mardini.

"It would be difficult to keep Americans in a hostile environment, especially when any decision to send more troops to buttress the remaining presence would entail paying political costs," he said.

But until the White House transition, an escalation by the US remains on the cards.

Last month, U.S. Secretary of State Mike Pompeo told Iraqi President Barham Saleh that the U.S. would close its embassy in Baghdad if the rocket attacks did not stop.

It was that ultimatum which prompted pro-Iran groups to agree to the truce, which put a halt to all rocket and roadside bomb attacks until Tuesday night.

Even throughout the calm, Iraqi officials told AFP that Washington was still working up how to evacuate hundreds of diplomats if the U.S. mission were to close.

They said the U.S. was also studying plans to attack Kataeb Hezbollah or other pro-Iran factions and unleash a "bucket list" of sanctions on Iranian interests before handing over to the Biden administration.

A U.S. official in Baghdad told AFP the new attack may speed up those plans.

"We're back to more of the same harassing attacks, but this time, the reaction may differ," the official said.

"This may be the nail in the coffin that the State Department was looking for."