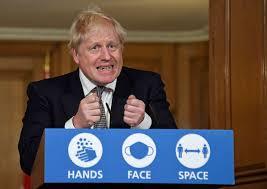 A probe by state auditors found the UK government has failed to account clearly for all of the £18 billion ($24 billion, 20 billion euros) it has spent on supplies and services linked to the pandemic.

The report by the National Audit Office (NAO) came as the ruling Conservatives also faced mounting attacks from opposition parties for allegedly handing out profitable Covid-19 contracts to well-connected business figures and donors.

"I'm very proud of what has been achieved," Johnson told lawmakers in response to the criticism, adding his government had "shifted heaven and earth" to source enough personal protective equipment (PPE) during the pandemic.

"We were facing a very difficult situation where across the world there (were) not adequate supplies of PPE."

However, opposition Labor MP Meg Hillier, chairwoman of the Commons Public Accounts Committee, said the NAO report's findings may be just the "tip of the iceberg".

She called on ministers to "come clean" and publish all information about the contracts they had awarded.

"By not being transparent about when these contracts were awarded and what they were doing, it lays the government open to these accusations," she told the BBC.

The NAO discovered that up to July 31, more than 8,600 contracts worth £18 billion in total had been dished out by the government, including £10.5 billion without any competitive process.

Ministers set up a "high priority lane" to favor companies recommended by their departments, civil servants, other MPs and senior staff from the National Health Service (NHS).

"We found inadequate documentation in a number of cases on how the risks of procuring suppliers without competition had been mitigated," its report said.

Some contracts were awarded retrospectively, after work had already been carried out, and there was "not always a clear audit trail to support key procurement decisions", it added.

The government was able to invoke emergency powers earlier this year to bypass normal tendering rules that regulate official contracts.

NAO chief Gareth Davies recognized the government faced "exceptional circumstances" when the pandemic took hold and that it faced a struggle to secure supplies of PPE in a strained global marketplace.

But he said it was "essential that decisions are properly documented and made transparent" if the government was to maintain public trust that taxpayers' money is being well spent.

"The evidence set out in our report shows that these standards of transparency and documentation were not consistently met in the first phase of the pandemic," Davies added.

The NAO found that PestFix, a pest control company, was mistakenly put in the high priority lane and then delivered 600,000 masks which failed to meet the government's PPE specifications.

Medical gowns it supplied also failed to meet correct standards but the Health and Safety Executive regulator came under "political" pressure to allow their use, the BBC reported this week.

The NAO report listed other companies, including ones engaged in public relations and artificial intelligence, linked to serving ministers that benefited from fast-track contracts.

It did not suggest any impropriety, but said the awards lacked transparency.

The findings come after the Sunday Times reported last weekend that the government had awarded £1.5 billion during the first wave of the pandemic to companies linked to the Conservatives.

Meanwhile a BBC investigation reported this week that a Spanish businessman who acted as a go-between to secure PPE for health staff had been paid £21 million in taxpayers' money.