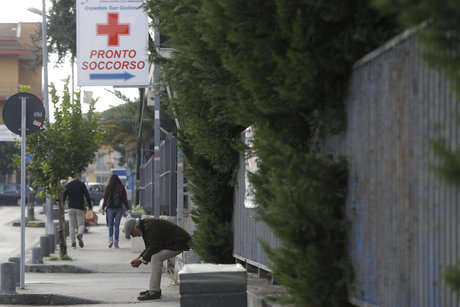 Faced with a dysfunctional health system and the resignations of three local leaders in quick succession, Italy has turned to a charity more accustomed to warzones to help tackle coronavirus in its poorest region.

International NGO Emergency, which specializes in providing healthcare to victims of war, poverty and landmines, has agreed to help out in Calabria, including by providing field hospitals.

But its surgeon founder Gino Strada, a veteran of health crises in Sudan and Rwanda, denied he was being lined up as health commissioner for the southern region after a series of chaotic postings.

Calabria -- the toe of Italy's "boot" -- was spared the worst when the country became the first in Europe to be hit by coronavirus earlier this year.

But as cases again rise nationwide, with more than 32,000 recorded on Tuesday, Calabria is ill-prepared and has been placed under the government's toughest "red zone" restrictions.

Doctor shortages, chronic mismanagement and the pervasive infiltration by the 'Ndrangheta, Italy's most powerful organized crime syndicate, have weighed for decades on the local health system.

In recent weeks, the system has also become a byword for managerial incompetence, as not one but three local health commissioners quit.

Eugenio Gaudio, a doctor and former rector of Rome's prestigious La Sapienza university, stepped down on Tuesday after barely a day in the post, saying his wife did not want to move.

His predecessor, Giuseppe Zuccatelli, quit on Monday after a furor over remarks he made questioning the usefulness of masks, which are mandatory in all public places in Italy.

Zuccatelli also suggested coronavirus could only be passed on by kissing someone "with tongues" for at least 15 or 20 minutes.

His predecessor Saverio Cotticelli, appointed in 2018, was fired in early November after a television interview in which he appeared unaware that it was his job to develop a plan to tackle coronavirus.

In an interview on Wednesday, Prime Minister Giuseppe Conte apologized to the people of Calabria, saying "they deserve a response after years of poor health management."

He told La Stampa newspaper that the government had agreed that Emergency would start immediate operations in Calabria "with field hospitals, Covid hospitals and triage operations."

The head of Federconsumatori, a leading consumer organization, condemned the rotating cast of local leaders in Calabria in an open letter Tuesday to the government.

"For more than 10 years, Calabria has been experiencing a dramatic situation in its health system," Emilio Viafora said.

"Its people have not been able to benefit from health services that other Italians have access to -- a situation made even worse by the crisis of the pandemic."

Health policy is usually controlled by Italy's regions but for the last decade, the central government in Rome has run services in Calabria.

"The health system in southern Italy lacks structure and trained personnel," Fabio Amatucci, affiliate professor of government and health at the University of Bocconi in Milan, told AFP.

"These are old problems that cannot be solved in a few months."