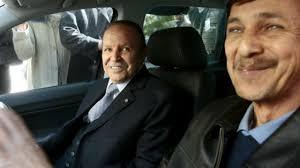 Algeria's supreme court on Wednesday said the brother of former president Abdelaziz Bouteflika and two ex-intelligence chiefs convicted of conspiracy against the state would be retried after appeals.

The once mighty Said Bouteflika was long seen as the real power behind the presidency after his brother suffered a debilitating stroke in 2013.

He had served as a key presidential aide but was detained in May last year, a month after Bouteflika quit office weeks into mass protests against his bid for a fifth term.

In February, a military court in Blida, near the capital Algiers, upheld the 15-year prison terms handed down to Said Bouteflika, General Athmane Tartag and General Mohamed Lamine Mediene.

Mediene, known as "Toufik", headed the powerful Department of Intelligence and Security for 25 years and was sentenced in September last year alongside the former president's brother.

Also in court were Mediene's former right-hand man, Tartag, and Louisa Hanoune, who had served as secretary-general of the left-wing Workers' Party.

Hanoune's initial sentence of 15 years was reduced to three years, of which nine months behind bars, and she was released in February on time served.

The supreme court said Wednesday that the case would be reheard after appeals by both the defense and the prosecutor.

The supreme court's decision sees "the cancellation of the decision on appeal and the return of the case and the parties before the military court of appeal in Blida".

The four defendants were accused of having met in March 2019 in a bid to derail plans by the army high command to force the departure of Abdelaziz Bouteflika.

The Blida military appeals court has not set a date for the retrial.