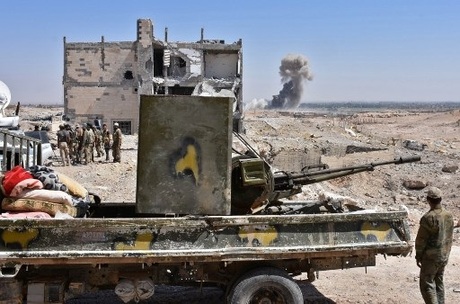 At least 14 pro-Iran militia fighters from Iraq and Afghanistan were killed in air strikes in war-torn eastern Syria, the Syrian Observatory for Human Rights said Sunday.

The strikes on Saturday night in Deir Ezzor province, on the border with Iraq, were likely carried out by Israeli war planes, the Observatory said.

The Israeli army said it doesn't comment on foreign reports.

More than 10 strikes hit positions of Iran-backed militias outside the border town of Albu Kamal, according to the war monitor.

Iran-backed fighters are heavily deployed in a stretch of territory between the Syrian towns of Albu Kamal and Mayadeen, both former strongholds of the Islamic State group.

Along with Russia, Iran has been a key backer of the Damascus regime in its nine-year-long civil war.

Israel has carried out hundreds of air and missile strikes on Syria since the civil war broke out in 2011, targeting Iranian and Lebanese Hizbullah forces as well as government troops.

I guess Israel must be sending a big "Than you" to Iran for regulary providing IDF with real-life targets. Darwin Awards though to the Iraqi, Lebanese, Afghani and what have you for thinking that its a good idea to being part of a Iranian military project inside Syria...

The Afghanis were probably there on vacation