Ten Years on, Tunisia is Arab Spring's Only Success 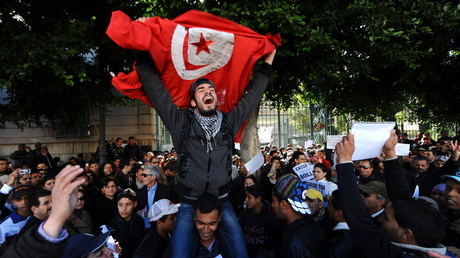 Ten years ago, the Arab Spring offered hope of a wave of democratic change across the Middle East and North Africa.

But only Tunisia has made the transition, with the other popular uprisings ending in repression, war or chaos.

Even so, recent popular movements that toppled leaders in Lebanon, Iraq, Algeria and Sudan have drawn inspiration from the uprisings.

This is an overview of how the Arab Spring countries stand today:

- Tunisia: Hard-won progress -A young street vendor sets himself on fire on December 17, 2010 and triggers nationwide protests against poverty and unemployment.

Protests against entrenched regimes spread across the region.

While Tunisia's transition to democracy is hailed internationally, it also brings political instability.

But a new constitution that limits presidential power in 2014 is a landmark, with Beji Caid Essebsi becoming its first democratically elected head of state.

The following year, Tunisia is hit by three major attacks claimed by the jihadist Islamic State. While the security situation improves, attacks continue.

But after a year marked by political dissent, Morsi is ousted in 2013 by the military, led by ex-army chief Abdel Fattah al-Sisi after mass protests.

At least 817 people die when security forces move in on two pro-Morsi protest camps. Amnesty International say a further 600 die in the crackdown.

Sisi is elected president in 2014 and again in 2018, but is accused by rights groups of running an ultra-repressive regime.

His rule is bolstered by controversial constitutional changes.

- Yemen: Verge of famine -Ali Abdullah Saleh's three decades in power ends in February 2012 after a year of protests.

But the country has been in turmoil since 2014 when Huthi Shiite rebels launched an offensive and seize vast swathes of the country, including the capital Sanaa. The following year, Saudi Arabia leads an Arab coalition to halt the Huthi advance.

Tens of thousands of people have died in the ongoing conflict, including many civilians.

The country is now in "imminent danger of the worst famine the world has seen in decades," the United Nations warned recently.

- Bahrain: Protesters jailed -The tiny Shiite-majority state ruled by a Sunni dynasty is rocked by unrest from February 2011 with protesters demanding reform.

But the movement is crushed a month later after Saudi-led Gulf troops move in.

Since then, the main opposition movements have been dissolved and dozens of dissidents jailed and stripped of their nationality.

- Libya: War and chaos -In February 2011, protests break out against the regime of Moamer Kadhafi and turn into an armed revolt.

The rebels win NATO backing and on October 20, Kadhafi's 42-year rule ends when he is captured and killed.

The oil-rich country has since descended into turmoil with two rival authorities and a multitude of militias vying for control.

Libya's UN-recognised government has been based in Tripoli since 2015, while military strongman Khalifa Haftar supports a parallel administration based in the east.

The standoff culminated in a failed 2019-2020 offensive by Haftar to seize the capital. Peace talks have been going on since.

- Syria: Nine years of devastation -Peaceful protests on March 15, 2011 escalate into a devastating multi-sided conflict that has left the country in ruins. So far, more than 380,000 people have been killed, with millions displaced.

Rebel groups battling the regime of President Bashar al-Assad are pushed aside in 2013 and 2014 by Islamist militias such as the Al-Nusra Front and the Islamic State group.

With military backing from Russia, Iran and Lebanon's Hezbollah, the Assad regime regains territory. Today, it controls 70 percent of the country.

Neighbouring Turkey, which supports the Syrian rebels, has since 2016 carried out three military operations in the north against Kurdish militias it sees as a threat to its own sovereignty.

In March 2019, IS jihadists are ousted from their last scrap of territory in eastern Syria.