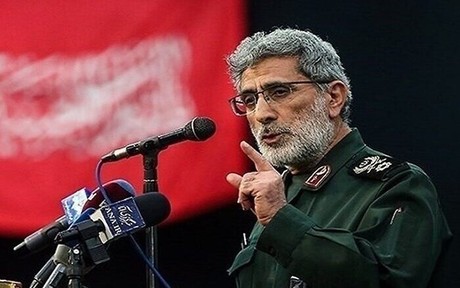 “Ghaani, who succeeded General Qasem Soleimani as the head of the Quds Force, the elite unit of Iranian Revolutionary Guards in charge of foreign operations, has paid a secret visit to the southern suburbs of Beirut in recent days and has spoken with (Hizbullah chief Sayyed) Hassan Nasrallah and other political and military officials of the party,” Lebanon’s French-language daily L'Orient-Le Jour reported.

“The Iranian official stressed the need to remain on alert for any eventuality, while telling his interlocutors that it was necessary to avoid any action that could be seen as escalation and exploited by Israel to launch a major operation,” the newspaper added.

Two senior Iraqi Shiite politicians had recently told the Associated Press that Ghaani had visited Iraq in recent weeks to tell Iranian-backed Iraqi militia factions and Shiite politicians to avoid provoking tensions with the U.S. that could give an outgoing Trump administration cause to launch attacks in the U.S. president's final weeks in office.

Around that time, Nasrallah himself warned followers and allies to be vigilant during Trump's remaining time in power.

This why Lebanon is now so isolated. Allowing characters like this one to enter Lebanon makes Lebanon a rogue state.

The brotherly strategic ties between Lebanon and the Islamic Republic of Iran get stronger by the day especially these days where an iron clad alliance is needed against the Saudi-American-Israeli-Sudani-Bahraini-Emirati coalition.

The Shia of Lebanon welcome such a great and legendary commander who is destined to Liberate Al Quds through Yemen, Syria and Iraq.

Shot up justin!!
He is our commander.

Seems like Israel has got their man in the Qods Force: "Please dont attack Israel!"....lol...

Nasrallah should be appointed PM and formally take responsibility for the decisions he makes for the Lebanese people.

Lebanon and its Strong presidency should be ashamed to have a terrorist visit the country.

Netanyahu, Nasrallah and Iranian regime, I don't believe they are the best friends, but for individual interest I do believe they need each other