Why is Israel Going to the Polls Again amid Pandemic? 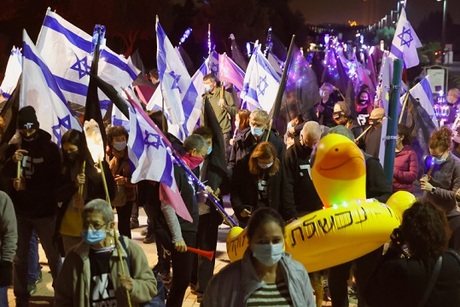 Israel faces yet another election as the Covid-19 pandemic rages, a new U.S. president is set to take power and Prime Minister Benjamin Netanyahu faces a corruption trial.

The veteran right-winger who has basked in the strong support of U.S. President Donald Trump, has won out in a series of deeply polarizing two-horse races over the past two years.

But now he faces multiple challengers, two of them from the right, in a wide open election that he will have to fight largely from the dock.

- Why did it happen and what comes next? -

Gantz said he wanted to end more than 18 months of political instability and give Israel a stable government to deal with the coronavirus pandemic.

The coalition deal gave the new government a lifespan of three years, with Netanyahu remaining as prime minister for 18 months and Gantz due to take over in November next year.

In recent months, tensions have spiraled between the two men, with Gantz accusing Netanyahu of delaying the adoption of a combined budget for 2020 and 2021, one of the conditions of the coalition agreement.

Lawmakers finally had until Tuesday night to approve a budget but they rejected a last-minute compromise by Gantz and parliament dissolved at the stroke of midnight, calling a fresh election for March 23.

- Did Netanyahu bring down the government? -

From the outset of the coalition deal, some political commentators had questioned Netanyahu's readiness to cede power to Gantz.

The right-winger is due in court early next year for his trial on charges of corruption, embezzlement and breach of trust, which will now coincide with the election campaign.

He could try to use his court hearings to present himself as victim of a "judicial coup". If he wins, he could seek legislation to give him immunity from prosecution as long as he remains prime minister, a maneuver which Gantz strongly opposes.

- What new cards can Netanyahu play? -

In the past four months, Israel has announced normalization agreements with four Arab countries -- the United Arab Emirates, Bahrain, Sudan and Morocco -- brokered by the Trump administration.

President-elect Joe Biden is due to succeed Trump in January, and it remains to be seen what efforts Washington will make towards further normalization agreements.

The four agreements made so far are popular in Israel, a country with hundreds of thousands of citizens of Moroccan descent who make up one of the pillars of the Likud, Netanyahu's party for 40 years.

The incumbent is also likely to talk up his handling of the Covid-19 pandemic.

On Saturday, Israel launched its vaccination program with Netanyahu the first to be inoculated.

- Who are Netanyahu's challengers? -

Since July, thousands of Israelis have rallied each week to protest against the prime minister and the economic fallout from the pandemic.

Many have also demonstrated against Gantz for his agreement to share power with Netanyahu.

But the protests have not translated into a boost in support for opposition leader Yair Lapid, a former Gantz ally who broke with him over the coalition deal.

Gantz's party, which was the frontrunner a year ago, languished in eighth place in opinion polls published on Wednesday.

Netanyahu's Likud has been the main beneficiary, although its pole position remains fragile.

Influential Likud member Gideon Saar quit earlier this month to form his own New Hope party to stake his claim to replace Netanyahu.

The newcomer is now snapping at the Likud's heels, trailed by the hard-right Yamina, headed by former Netanyahu aide Naftali Bennett, in third place.

Lapid's Yesh Atid party lags behind in fourth with the Arab-led Joint List in fifth.

For the first time in three elections, Netanyahu now faces multiple rivals rather than just one -- two of them challenging him from the right.

Under Israel's system of proportional representation, which enables even small parties to win seats, that is likely to translate into a complex race for the premiership.