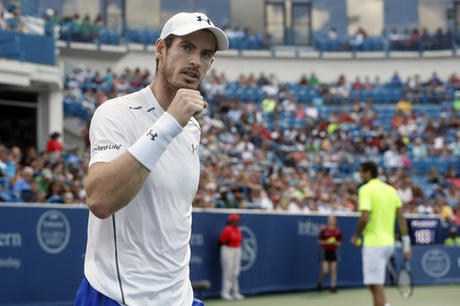 Andy Murray's participation in the Australian Open has been thrown into doubt after it was revealed on Thursday he had tested positive for coronavirus.

The British former world number one was due to travel to Australia on one of a series of charter flights laid on by tournament organizers but is still isolating at home in London.

It is understood that Murray, apparently in good health, is hoping to be able to arrive in Australia at a later date.

Australian Open organizers wished the 33-year-old a speedy recovery but it was unclear whether he would still have a chance to take part.

"Andy Murray has advised that he has tested positive to Covid-19 and is isolating at home in the UK," they tweeted.

"Unfortunately this means he will be unable to join the official AO charter flights arriving in Australia in the coming days to go through the quarantine period with the other players.

"The AO fans love Andy, and we know how much he loves competing here in Melbourne and how hard he'd worked for this opportunity."

The five-time Australian Open runner-up pulled out of last week's ATP event in Delray Beach, Florida, as he wanted to "minimize the risks" in the run-up to the year's first Grand Slam.

Murray, who has slumped to 123rd in the world rankings, was handed a wildcard for the Australian Open.

The three-time major winner is hoping to make his first appearance in Melbourne since the emotional events of 2019, when he revealed the extent of his right hip problem and raised the possibility of imminent retirement.

Murray was able to return to playing after a hip resurfacing operation but has experienced several setbacks since.

The Scot was able to play just seven official matches in 2020 because of a lingering pelvic injury, and the coronavirus-enforced suspension of the season.

Murray spoke positively about his fitness in November and played two matches at last month's Battle of the Brits event.

More than 1,200 players and support staff are arriving in Australia from Thursday for 14 days' quarantine ahead of the delayed tournament, which is due to start on February 8.

Craig Tiley, the Australian Open tournament director, has spent months trying to deal with the logistical nightmares of hosting the Grand Slam during a pandemic.

Tennis Australia said players were only allowed into the country with proof of a negative Covid-19 test prior to departure, or with approval as a recovered case at the discretion of the Australian government.

The men's qualifying tournament for the Grand Slam took place in Qatar.