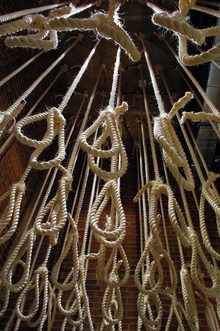 Three Iraqis convicted of "terrorism" were hanged on Monday, a security source said, days after a deadly double-tap suicide attack in a crowded Baghdad marketplace.

"Three people convicted under Article 4 of the anti-terror law were executed on Monday at the Nasiriyah central prison," the source told AFP on condition of anonymity.

The reported hangings came after rights groups warned Iraq may give the green light to a spree of executions of convicted jihadists in a show of strength following the bombings on Thursday which killed at least 32 people.