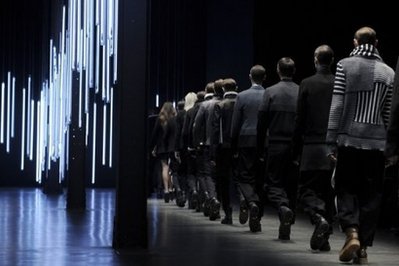 Milan Fashion Week opened on Wednesday, with glitterati and fashion watchers flocking to the glamorous Italian city known for its opulence and obsession with high fashion.

"It's an exciting moment. We've pulled out all the stops to make Milan the leading Fashion Week for women wear on the international stage," Mario Boselli, head of the organizers, Milan's Camera Moda, told Agence France Presse.

After London and New York, fashionistas can see the latest from 66 designers on 76 runways, including an exclusive few who will unveil their collections on catwalks in front of the city's towering Gothic cathedral.

Gucci, Alberta Ferretti and Roccobarocco kick off proceedings on Wednesday, while Thursday's catwalks will star Fendi, D&G and Prada.

Versace and Etro follow on Friday, with Bottega Veneta, Emporio Armani and Roberto Cavalli on Saturday.

Newcomers Carta e Costura, Erhan Coruh and N-U-D-E will be showing on Monday March 1, before buyers, journalists and the fashion set jet off to Paris Fashion Week, which runs until March 9.

Unlike last year, when the new names led Milan as a beacon of hope in a struggling industry, this year the novices are expected to take a back seat as Italy's finest brands revel in a post-economic crisis financial turnaround.

After powerful and temperamental U.S. fashion editor Anna Wintour cut short her stay last year, throwing Milan into uproar and forcing organizers to cram shows into a reduced timetable, Camera Moda underwent a makeover to lure her back.

"We're definitely on the way up again now after the crisis. We've got live streaming, maxi screens, a full calendar of the top names. Everything's changed," Boselli said.

Most of the runway shows are now held in the city's historic center, just a stone's throw away from Milan's Golden Triangle, a collection of streets lined with the lavish stores of Italy's highest-performing luxury labels.

Camera Moda has also arranged a host of cultural events for the evenings, including visits to some of the city's museums, exhibition openings and a Duran Duran concert.

The city also boasts the first 'fashion train', which on Sunday evening will transport designer Alessandra Marchi's models and guests to her show and on to a cocktail party afterwards.

The tiny cobbled streets around Milan's main cathedral square buzzed in the lead up to the first shows, with last-minute attempts to bag an invitation to exclusive after-show parties hosted by Gucci, Harper's Bazaar and Vogue.

Those unlucky enough not to have been invited to the events can watch the models shimmy down the catwalks for many of the top designers on large screens set up near the cathedral.

Roccobarocco, Ermanno Scervino, Frankie Morello, C'N'C Costume National and Emilio Pucci are among those who will be live streaming their shows.