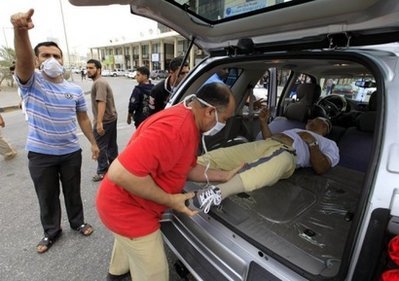 The U.N .rights office on Tuesday criticized Bahraini forces for their "disproportionate use of force" as they sought to quell protests, saying their use of tear gas may have led to over 30 deaths.

"We have been receiving worrying reports of the disproportionate use of force by Bahraini security forces, including the excessive use of teargas, the use of birdshot pellets and rubber bullets," said Rupert Colville, spokesman for the U.N. High Commissioner for Human Rights.

Colville said the office was unable to confirm figures but added that non-government organization sources had reported "more than 30 over the course of the past year" as having died due to tear gas-linked complications.

"What's disturbing is the sharp increase in the last two to three months," he said, noting that NGOs were reporting up to two cases every month last year, but that in January six fatalities were recorded and in February seven.

"Over the last few days, another three," said Colville, pointing out however that there was some dispute about their causes of death.

"We call on the government of Bahrain to investigate the alleged use of such excessive force," said the spokesman.

Tensions have remained high in Bahrain since a deadly crackdown last year after a month of Manama street protests.

According to an independent probe, 35 people were killed in unrest between mid-February and mid-March 2011.

good riddance Farsi thugs..... they have a wonderful country but they are intent on making it a follower of iran....

There are a number of blatant contradictions here. Firstly, the claim that 30 people died from tear gas, when this is closer to the total number of people who have died in the disturbances, is odd. If most of the deaths over the past year are accidental tear gas deaths then this rather undermines the opposition rhetoric about a brutal regime killing its citizens.

According to Iranian propaganda channels like Press TV and Al-Alam TV, there have been no natural deaths in Bahrain over the last year and everyone who dies quietly in their beds has been logged as a tear gas victim (although in some cases the elderly and young children have been tragic victims). So the UN should be careful of whose statistics they use.

The UN official is quoted as talking about a “rising” death toll in recent months. To the best of my knowledge only one person has died in the last three months (9 March – tear gas). In what manner is this a rising toll.

I went away and did some research on this, considering that the UN statistics contracticed my own understanding so sharply.

However, looking at the statistics on which these claims were based, my confusion increased. A main source is the Bahrain Centre for Human Rights – I’d hope the UN realizes that this is a major opposition grouping, not an impartial observer.

Another set of statistics are held by the presumably more credible Physicians for Human Rights organization. However, if you inquire about their sources; they turn out to be other organizations (largely BCHR) or the media (Press TV being the main media reporting on such issues).

The curious thing is that the number of alleged deaths from tear gas, according to these sources, has increased to around six each month for 2012; while the statistics claimed 0-2 tear gas related deaths for most of 2011. Why the sudden epidemic of victims?

Over the same period, only one person has been killed as a direct result of the protests since the beginning of the year (Mirza Fadl al-Obeidy, hit by tear gas canister).

The deaths quoted by these organizations’ statistics include numerous people who died a matter of weeks after they supposedly inhaled the tear gas; several where there were disputes between the doctor, the family and the authorities about the cause of death; or others attributed to asthma.

We know that – if you take Press TV seriously – there have been no natural deaths in Bahrain; everybody who died in their sleep has been highlighted by these Iranian propaganda channels as “martyrs”.

We hope that - given the recent failure of the Bahraini security forces to provide the opposition with martyrs - organizations like BCHR aren't also logging anyone who dies as a “tear gas victim”.