Interview with the Founder of Breedo, a Lebanese Daily Deal Website 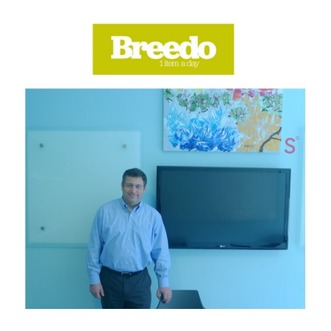 Breedo.com (“I want it” in Lebanese) is a daily deal website offering discounted and limited quantity products. Right now the products are mainly electronics. However, the team plans to expand their offer by adding a range of diversified products.

“The ultimate goal is to become a reference for any company that is selling products at a big discount”, says Emile Boustani, Breedo’s Founder.

Recently Emile visited our offices in Hamra and explained the concept behind Breedo. Let’s go through the key notes.

What sparked the idea?

After 20 years of travelling around USA and Africa, Emile moved back to Lebanon and came up with the idea. He was inspired by some similar websites operating in the US.

“The idea is not genuine, but when we started there was no such thing here. At the same time my friend, who became my partner, was already working on a similar project”, explained Emile.

Good on you for sticking to it,
Consistency and persistency
are keys to success

I want it in lebanese???????? Which moron wrote that? Is this a blog or a professional website? Lebanese is not a language. Breedo is arabic used all over the arabic gulf, iraq and the levant and possibly in north africa as well. Also pronounced Berido and Barido. Have some selfrespect instead of pretending like we have our own seperate language. Thats just embarassing.